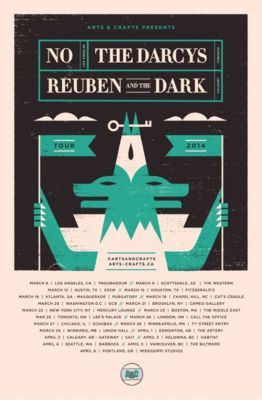 Featuring: NO, The Darcys, Reuben And The Dark

Arts & Crafts is proud to announce a North American tour featuring three of the Toronto-based label's exciting young artists, showcasing across the continent this March and April. The tour package is an extension of Arts & Crafts' long-standing collaborative spirit and is the latest in a tradition of A&C label packages that began with Broken Social Scene, Feist and Stars nearly a decade ago. Bands will share stages and rotate slots throughout the tour - which includes a stop at SXSW - collaborating on exclusives and offering fans a unique live experience driven by Arts & Crafts' continued commitment to fostering creativity and discovery. Los Angeles six-piece NO will release debut album El Prado on February 18, having teased the anticipated record with first single "Leave The Door Wide Open" and a haunting cover of Leonard Cohen's "Suzanne." Toronto art-rock quartet The Darcys released its latest album Warring in late 2013 to critical acclaim, described by SPIN as a "pretty hybrid of Local Natives and Atoms For Peace" and recently hailed by NYLON as "your new favourite band." Emerging Calgary folk rock outfit Reuben And The Dark are building towards the Spring 2014 release of its anticipated debut full-length, already buoyed by the success of a North American tour with Paper Kites and incredible reaction to debut singles "Rolling Stone" and "Shoulderblade."