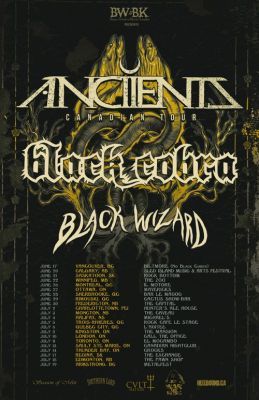 Anciients (http://www.facebook.com/ANCIIENTSRIFFS) Black Cobra (http://www.blackcobra.net/) Black Wizard (http://www.facebook.com/blackwizardband) "Somewhere between sheer, apocalyptic heaviness and precise riffing, lays otherworldly ANCIIENTSŚa Vancouver-based rock juggernaut forging crushing heavy metal evocative of veterans High on Fire and contemporary sonic craftsmen, Opeth. ANCIIENTS have combined fuck-off-huge chords with mind-altering riffage that takes you on an unfamiliar trip." http://www.anciients.com http://anciientriffs.bandcamp.com https://twitter.com/ANCIIENTS BLACK COBRA. Formed by drummer Rafa Martinez (ex-16, ex-Acid King) and guitarist/vocalist Jason Landrian (ex-Cavity), BLACK COBRA catapulted themselves onto the scene in 2001 with their ravenous, upbeat and ultimately unique style of punk/hardcore-fueled sludge metal. They were picked up almost immediately by indie At A Loss Recordings becoming the band's label home for the release of their debut full-length, Bestial, and follow-up album, Feather And Stone. By 2009, with the band then virtually a household name to the tens of thousands of fans who've seen their flooring live performances over the years, BLACK COBRA signed with juggernaut Southern Lord Recordings for the release of Chronomega, the band's most diverse material to date. http://www.blackcobra.net/ http://www.facebook.com/blackcobramusic http://twitter.com/#!/blackcobramusic 'Black Wizard have really done it with this album. Their performance is impressive, the sound is massive, the vocals are colossal and the guitar leads are seriously, seriously great. If you are a doom metal fan then Young Wisdom will put you in an ecstatic state of mind." - CVLT Nation "Nothing short of excellent, Young Wisdom is by far one of the best albums I have heard yet in 2013, boasting an impressive collection of stoner rock that will quickly find its place amongst notable acts such as The Sword and Priestess." - Ride with The Devil http://blackwizardband.blogspot.com/ https://www.facebook.com/blackwizardband/