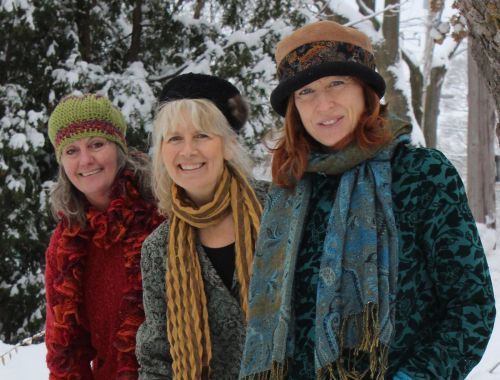 Boreal - "Songs for the Snowy Season" (presented by Cuckoo's Nest)

Boreal are Tannis Slimmon, Katherine Wheatley, and Jude Vadala. Each December they team up to present a very special concert of Christmas and other seasonal music titled "Songs for the Snowy Season." These three Guelph songstresses have dug up old and new songs written about the snowy season. Their ability to pick a great song, their love of beautiful lyrics, melodies and harmonies, their combined songwriting skills, their tour de force voices and the joy they feel singing with each other all make for an unforgettable event. Join them in welcoming winter. Boreal's show has become a Christmas tradition for many audience members. It started in Jude’s kitchen. Katherine, Tannis and Jude, all with music careers of their own, decided to join forces and do a show of winter songs. The rehearsal space was Jude’s kitchen table. After a few weeks of meticulously working out harmonies, singing a cappella on some songs and adding guitar on others, Boreal did its first show. That was over seven years ago. This coming 'Snowy Season' will see the launch of a brand new album for Boreal, featuring many of the songs they are known and loved for in their live shows. Album releases have been scheduled in Elmira, Brampton, Guelph, Newmarket and London, Ontario with more to be added soon. Individual Bios: Katherine Wheatley plays over 100 shows a year. In addition to touring as a solo singer-songwriter, she is a member of “Betty and The Bobs” and plays guitar in Wendell Ferguson’s band. She writes and records songs with kids through her Youthsongs program and has produced 20 CDs with schools across North America. This geologist-turned-musician has been singer/zodiac driver on board Gadventure’s ship, The MS Expedition as it plies the seas of Antarctica and the Norwegian Arctic. Landscape and character inform her songs. “She turns pebbles of everyday life into dreamy mountains of song.” (The Toronto Star) Tannis Slimmon delivers performances that are uplifting, engaging, participatory, reflective. As Canadian Folk Music Awards’ 2008 Contemporary Vocalist of the Year, Tannis brings over 30 years of performance experience to the stage with memorable songs from her three critically acclaimed albums, Oak Lake, Lucky Blue and In and Out of Harmony. She has actually appeared on over 80 albums, including those by Willie P. Bennett, Valdy, David Francey and Rheostatics, and has been a guest artist with a number of choirs including Kingston’s Open Voices Community Choir and the Guelph Chamber Choir. Recognized as one of the best roots music singers in the country, she is “a breathtaking vocalist with a bright and angelic disposition”. (Exclaim magazine) Jude Vadala has been a tenacious member of the Guelph music scene for the past 30 years. Her musical adventures have taken her across Canada and the U.S. with the critically acclaimed group The Bird Sisters where she honed her skills as a songwriter and recording artist. She has produced four albums (Flo, Different Stories, She and She and She and Angel Songs) and has worked on 50 musical projects with artists such as James Gordon, Lynn Miles and Suzi Vinnick. Jude released her fifth album ‘Do You Ever’ in 2010.

Boreal - "Songs for the Snowy Season" (presented by Cuckoo's Nest)