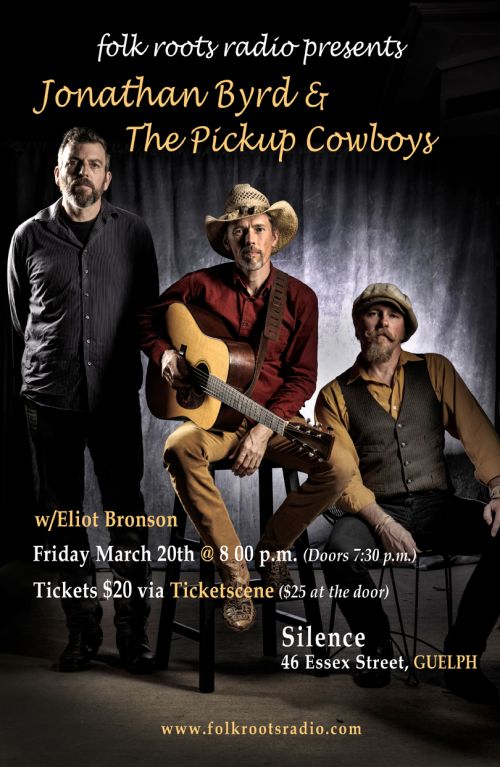 Jonathan Byrd and The Pickup Cowboys

Jonathan Byrd returns to Guelph on Friday March 20 for what is expected to be a sold out show at Silence. Joining Jonathan and his band The Pickup Cowboys this time around will be Atlanta-based singer-songwriter Eliot Bronson, one of the hottest new acts on the folk-roots scene. It promises to be a great night so get your tickets early. Jonathan Byrd & the Pick up Cowboys w/ Eliot Bronson March 20 2015 at 8 p.m. (Doors 7:30 p.m.) Silence, 46 Essex Street, Guelph, ON Tickets $20 ($25 at the door) Advance tickets are available on Ticketscene HERE until Friday, March 20, 2015 at 3:59 p.m. unless the event sells out earlier. About Jonathan Byrd Jonathan Byrd has been called one of the top 50 songwriters of all time (Rich Warren of WFMT in the Chicago Tribune) and the most buzzed-about new songwriter in folkdom (Scott Alarik of the Boston Globe). Anyone who knows his music will know that these are hardly over the top descriptions for a songwriter who has also been described as having John Prines gift for stark little songs that tell big, complex stories, Guy Clarks lean melodicism, Lyle Lovett's wry mischief, and Bill Morrissey's knack for the revealing image. That he puts on one of the best live shows on the folk scene is a given. Jonathan's latest album is You Can't Outrun The Radio. For more information visit jonathanbyrd.com. About Eliot Bronson The Atlanta Music Guide describes Eliot Bronson as the type of songwriter who could squeeze out something meaningful about taking out the trash. He writes heartfelt songs with dark humor and backs them with his resonant voice and swampy instruments. Eliot Bronson's latest self-titled album, tracked entirely in analog by acclaimed Nashville producer Dave Cobb (Sturgill Simpson, Rival Sons, Jason Isbell, Nikki Lane) is already creating quite a buzz on the folk scene. For more information visit eliotbronson.com.

Jonathan Byrd and The Pickup Cowboys