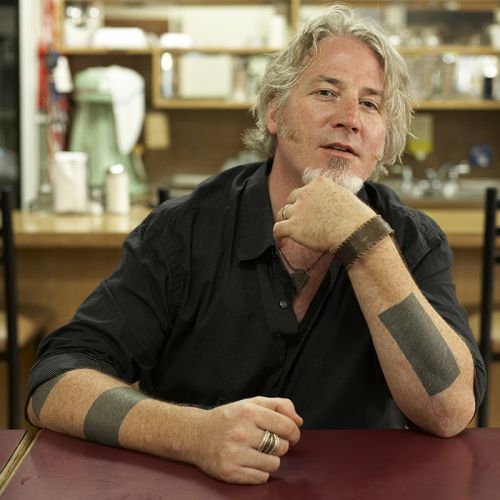 For Jon Brooks, Kerrville New Folk Winner and a three-time “Songwriter of the Year" nominee at the Canadian Folk Music Awards, social commentary is as much a part of his being as is being a songwriter. His critically acclaimed 2012 album "Delicate Cages" focused on themes of love and fear; and freedom and imprisonment. The subject matter as wide ranging as it is topical and controversial: the Alberta tar sands (Fort McMurray); Bill 101 and Quebec’s language laws (Hudson Girl); Palestinian suicide bombers (Son of Hamas); Bosnian child soldier turned Canadian mixed martial arts fighter (Cage Fighter); and so-called ‘Honour Killing’ (The Lonesome Death of Aqsa Parvez). Morally and politically ambiguous, Delicate Cages offered what Jon has since called, "necessary and alternative understandings of ‘hope’ and ‘grief’ that are neither sanitized, dumbed down, nor degraded by the modern lie of ‘closure'." For his latest, “The Smiling and Beautiful Countryside", Jon buried his trademark social commentary in an album of rural Canadian murder ballads that holds a mirror up to contemporary society and encourages the listener to reflect on what it all means. “I write songs to calm those who’ve looked into, and seen, what is in their hearts. I also write songs to terrify those who have not." Philosophical paradox, gallows humour, impossible love, titillating gore, adulterous sex, serial killers, gun dealers, rampage killing, missing women, First Nations catastrophe, necrophilia, Shakespeare, and John Milton: The Smiling and Beautiful Countryside is neither an album for casual fans nor is it music that will ever be heard in your dentist’s waiting room. Why record such a violent set of songs? In Jon’s words, “because: a) I wanted to write an album from which nobody indifferently escapes, an album that can only be loved or hated; b) if courage is a muscle, it needs to exercised with a healthy dose of fear today; and c) I’ve already done four albums that inspire: it’s now time to offend." “Brooks stands among an exalted few in the enduring Canadian song tradition – Leonard Cohen, Joni Mitchell, Neil Young, Fred Eaglesmith, Bruce Cockburn – as a lyricist, composer and performer with a fierce commitment to his craft and his vision." (Greg Quill, Toronto Star)