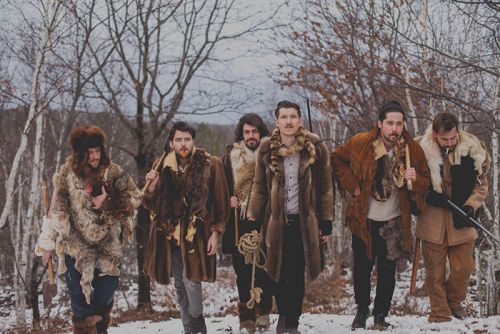 Murder Murder are bringing their wonderful and rousing live roots music to Guelph for a show at Silence on June 20 as part of their "From the Stillhouse" album release tour. How do you describe Murder Murder? Well, they describe themselves as a Bloodgrass band… that’s Bluegrass + Outlaw Country + Exclusively Murder Ballads. As devoted fans of bluegrass, traditional music, and folk music, they were drawn to the murky ethical themes of the murder ballad and its enduring nature. Murder ballads have often captured the essence and atmosphere of a dark, lawless and violent frontier. Northern Ontario, although never romanticized in the way that the Wild West or Canada’s far north were during the gold rush era, was once such a place - with a wealth of stories and characters. Come and join Murder Murder as they bring their tales of death back to life with a kick of the suitcase, saw of the fiddle, and roll of the banjo. Murder Murder are: Jon Danyliw - Vocals, Guitar, Mandolin Sam Cassio - Vocals, Guitar, Mandolin Geoff McCausland - Fiddle Barry Miles - Vocals, Banjo, Dobro Kris Dickson - Upright Bass Steph Duchesne - Percussion "The heaviest bluegrass band on Earth" - Marcus Fougere (Eastcoast Love Story) Joining Murder Murder for the night will be Minnie Heart and Bill Howard from Kitchener's Ever Lovin’ Jug Band a band who play original music inspired by the jug bands of the 1920s & 30s. They're building a great reputation in their own right and will be gracing the stage at the Mariposa Folk Festival, Hillside Festival, the Mill Race Festival and Summerfolk this year! For more information: visit http://www.everlovinjugband.ca/about.html