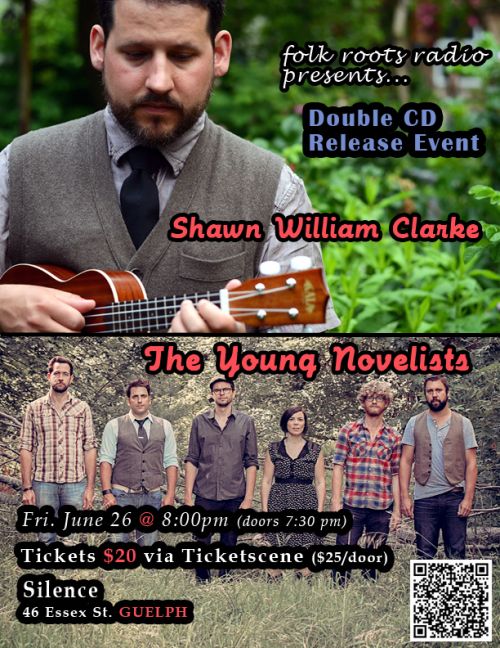 Folk Roots Radio is pleased to host a double CD release featuring... The Young Novelists and Shawn William Clarke at Guelph’s wonderful listening venue Silence on June 26. THE YOUNG NOVELISTS The Young Novelists are lead by musical and life partners Graydon James and Laura Spink. The release of their sophmore album "made us strangers" finds the band in fine form with thoughtful lyrics, gorgeous harmonies to go with a great live show. From major festivals like Mariposa and CMW to iconic theatres like the Neptune in Halifax to trendsetting hotbeds like Toronto’s Horseshoe Tavern, The Young Novelists’ show is as engaging as it is endearing and has earned them slots alongside the likes of Cuff the Duke and The Strumbellas. For more information, visit http://theyoungnovelists.com. “For fans of Blue Rodeo, The Band, and pre-weirdness Wilco, here are three last words: Step right up." - John Sakomoto, Toronto Star SHAWN WILLIAM CLARKE Shawn William Clarke has long been a sideman with acts like the gypsy-folk collective Olenka and the Autumn Lovers and Arts & Crafts recording artist Timber Timbre. But a few years ago, the Toronto musician branched out to pursue a solo career, putting himself squarely in the spotlight. Clarke's sophomore album, “William" features some great autobiographical storytelling alongside a number of songs inspired by cities and small towns, Clarke has visited across Canada. “Some Nerve" is a solemn tribute to unconditional love in a slowly progressing landscape, while “I Blame the Loyalist Ghost" is a tongue-in-cheek lament on being sick during an East Coast tour. “William" also contains the song “Tranzac Club", which tells the tale of a new love blossoming in his current hometown Toronto. For more information, visit http://shawnclarkemusic.com. "Shawn's music contains two things that I love: space and simplicity. Nothing is overplayed, it's wonderfully subtle and understated. And the simplicity reveals itself in immediately identifiable themes and accessible songs. It is really a great record!" - Craig Norris, CBC Radio