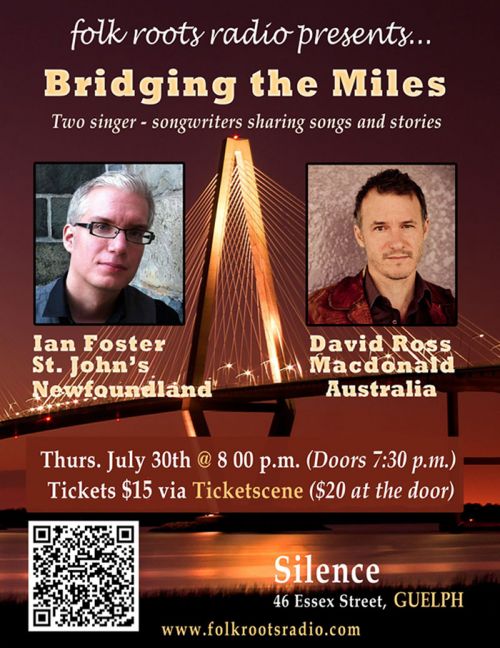 For those of you looking for some great music to fill the post Hillside void, our next Folk Roots Radio presents… show features two fabulous singer-songwriters, Ian Foster from St. Johns and Australian (but no stranger to Guelph) David Ross MacDonald. They’ll be sharing the stage and swopping songs and stories at Silence Guelph on Thursday July 30. It promises to be be a great night. We hope you'll join us! About Ian Foster Newfoundland native Ian Foster comes from a place of stories, and he knows how to tell them. He’s a road worn troubadour who has been described as having a keen poetic sense and a searcher’s infinite wisdom in his writing, and yet can make you laugh between songs. He writes in a modern folk style and exudes a love of storytelling. CBC’s Bob Mersereau described him as being “a fine example of what a 21st century folk performer should be doing." Often likened to Canadian songwriting icon Bruce Cockburn in both writing and guitar style, Ian’s music has been described as thoughtful, introspective, cinematic, hopeful, atmospheric, and cathartic by critics and fans alike. He has numerous awards, nominations and co-writes to his credit, including SOCAN Songwriter of the year nominations, Lyric finalist for the International Songwriting Competition (Nashville, TN), and a co-write with Canadian songwriting legend Ron Hynes. Ian's last album is 2014’s “The Great Wave". For more information, visit http://ianfoster.ca. About David Ross MacDonald Australian David Ross MacDonald is a guitarist and singer-songwriter with an interesting past. A trained geologist, he is also a jazz turned folk-roots drummer for acclaimed Australia band, The Waifs. He’s equally well-known for his gorgeous finger-picking instrumentals as for thought provoking lyrics and a languid vocal style that can give you goose bumps. Having played with and opened for such luminaries including John Renbourn, Tony McManus, Kelly Joe Phelps and Chris Smither, Macdonald constantly tours internationally armed with his 1935 Gibson guitar and a carpet bag of songs that he illuminates in his own inimitably reserved yet intense, poetic style. He deals in subtlety, intimacy and nuance with a tunesmith’s hand creating songs and music with a haunting and poignant quality. David's most recent album is 2010’s “Thorns to Sleep". For more information, visit http://www.davidrossmacdonald.com.