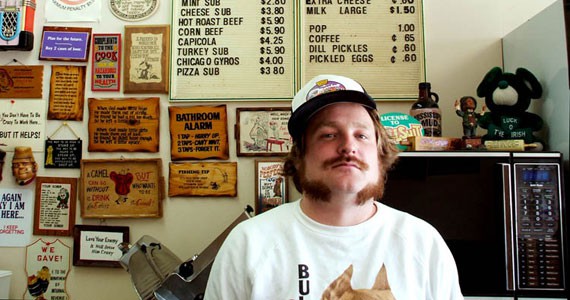 *Limited tickets still available at the Pub.* B.A Johnston brings his riotous cross Canadian tour of B-grade roadside diners & McDonald's odes to Owen Sound for this first historic occasion! We will recount the time he couldn't get into Norma Jean's to see the Burning Hell at Lupercalia, sing odes to McDonald's coupon day, and hold the first of many donut eating contests! "Johnston is known for his energetic live performances, where he frequently enters the audience, removes clothing, and gets progressively drunker over the course of his show. Johnston tours often and usually plays small dive bars in mid-size to large cities across Canada. His music often builds on self-deprecating references to local Canadian life, such as his love for Hamilton, Ontario, his time spent living in Peterborough, Ontario where for a time he studied philosophy at Trent University and worked at the now defunct club The Trasheteria, various bars, shopping malls and fast food locations where he eats, and life as a poorly paid non-stop touring musician. Additional favourite lyrical topics are his love for fried foods, touring in his Mom's Toyota Previa Minivan and living in her basement." - Wikipedia Vandeleur are the captains of the love boat of yacht-rock. Sail aboard their smooth sounds, as they make musical love to your ears with a catalogue of easy listening classics from Lionel Ritchie to Robert Palmer. tWeen is Grey County's only all Ween cover band. *Sign up for the donut eating contest on Facebook, or at the venue on the night of the concert.*