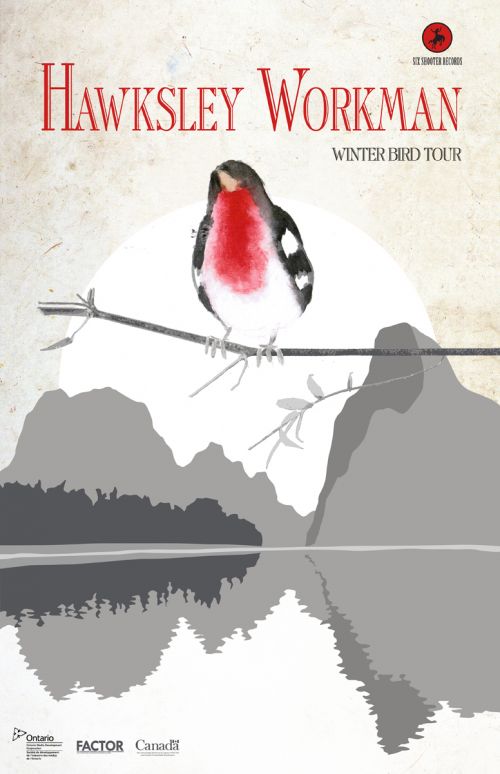 Hawksley is taking his band on the road for the Winter Bird Tour. The tour is named for the song on Old Cheetah, an ode to freezing and thawing, one of the great Canadian metaphors for love and life. Instinct is everything. More about the artist. Hawksley Workman is not afraid to be strange. After over a decade in the business, this hyper-prolific, perpetually restless creative force continues to push the boundaries of experience and the heights of his successes well outside the comfort zone. In fact, Hawksley Workman’s comfort zone is probably not all the comforting to most: it’s left of left field and nowhere near the beaten path. Call him a lone wolf, an odd duck or a strange bird; just don’t call him ordinary. Old Cheetah ends a five-year hiatus from solo recordings. Since Hawksley last released an album, he has found himself back behind the drums with Mounties, an indie rock supergroup that gained considerable traction at alternative radio and capped off an impressive debut album run with the Emerging Artist of the Year award at the 2014 SiriusXM Indies. He also developed a one-man cabaret theatre performance called The God That Comes, which continues to draw rave reviews, sold out crowds, and international attention. Old Cheetah is as idiosyncratic a collection of songs as you might expect from an artist who covers as much stylistic ground as Hawksley: from a swirling nuclear fusion of cabaret theatricality, glam rock and wantonly pop musical elements comes this defiantly unbridled and exuberantly unclassifiable collection of songs. Hawksley Workman’s process is as close to spontaneous creative combustion as you can get without a permit; to paraphrase a famous quote, it might take just a few hours, but it also takes a lifetime. Hawksley’s touring career has seen him play nearly a thousand shows in over 15 countries. He’s headlined prestigious venues like Massey Hall in Toronto and The Olympia in Paris, as well as opening for heroes Morrissey, David Bowie, and The Cure. As an actor Workman has appeared in films such as Score, Hockey a Musical (he also wrote a portion of the music), Youkali Hotel, and Stormy Weather. Beyond his own solo work, Hawksley has written songs for many feted artists including legends Johnny Hallyday and Jane Birkin.