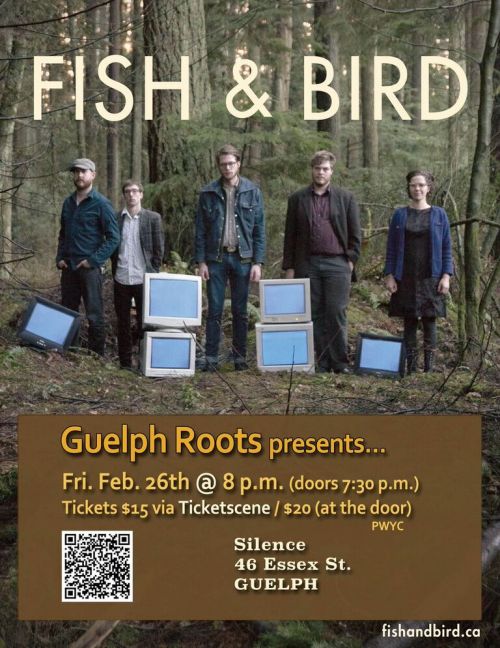 Raised on equal parts roots music and Radiohead, Fish & Bird have received praise on both sides of the Atlantic for their refreshingly unclichéd writing. With their fourth album, Something in the Ether (released on Fiddle Head Records in September 2014), the young Canadian band continue to reimagine folk music for a new generation. The group members have been friends more or less since childhood, growing up in the small community of idyllic Mayne Island, a remote 900-person island off the west coast of British Columbia. Songwriter Taylor Ashton and fiddler Adam Iredale-Gray formed Fish & Bird in 2007, based on a shared interest in traditional old-time music. They quickly found that their musical interests spanned many genres and styles of music, including jazz and indie rock. The duo gradually grew into a five-piece and now, 7 years later - after extensive cross-continent touring and growing critical acclaim - the band presents their most ambitious effort to date. The two founding members are joined by drummer Ben Kelly, electric guitarist Ryan Boeur, and upright bassist Zoe Guigueno, presenting a collection of songs that effortlessly fuse their traditional folk influences and experimental leanings into a coherent, modern-day roots opus. The album was engineered and masterfully produced by Adam Iredale-Gray, whose studio is situated on his family’s sheep farm on Mayne Island. Surrounded by giant trees and the Pacific Ocean, this isolated location continues to create the perfect setting for the band’s creative process to breathe. Away from the demands and over-stimulation of the city, the band were able to fully focus on realizing the songs the way they needed to be played. While the studio is literally in the house where Adam grew up, the property is in many ways a second home for the band. This is especially important given that nowadays the members of the band are spread across the continent - with Boeur and Kelly in Vancouver, Iredale-Gray attending Berklee College of Music in Boston, and Ashton spending time immersing himself in the innovative music scenes of Toronto and New York. But when it comes time to create, the members choose to suspend their respective metropolitan existences to create the unique brand of folk they have become known for.