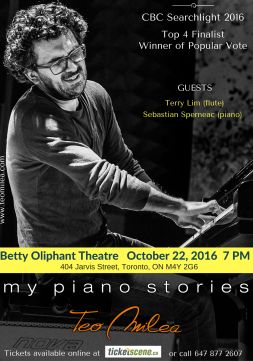 My Piano Stories in Toronto

Saturday, October 22nd, 2016 - 7:00 PM Doors open: 6:30 PM ----- Online Tickets: $33 Tickets at the door: $35 ----- UPDATE: This concert is SOLD OUT! 10 extra seats have been added. UPDATE: Among the piano works you are going to hear that evening, all composed by Teo Milea, here are a few highlights: * "Irreversible" - Top 4 finalist song that won Popular Vote at Searchlight 2016 on CBC Music * "Remembering" - specially composed for McMichael Canadian Art Collection`s 50th Anniversary Moonlight Gala * Soundtrack for "Little Boshkung (Lake of many echoes)" - film by Andrew Lennox * "City Lights" - piano composition for four hands inspired by Toronto - guest Sebastian Sperneac (piano) * "Autumn Sky" - composition for piano and flute - guest Terry Lim (flute) ----- “Some very talented people can construct pseudo-narratives from the music itself. Teo Milea has the rare ability to do all this with only the use of his piano… Milea has enough talent in him to become not only one of the next great piano players but composers, too". (The Scene Magazine - Toronto, Canada) Winner of Popular Vote and Top 4 finalist at the well-known 'Searchlight' music contest on Radio CBC Canada, winner of '2015 Classical Album of the Year' category on SoloPiano.com Radio US and of The Akademia Music Awards 'Best Ambient/Instrumental Album' with his latest release 'Open Minds', applauded and acclaimed on international scenes for his piano compositions, Romanian pianist Teo Milea brings to the audience a creation that successfully combines the specific of two worlds: the classical and the new one, of the 21st century. All his creation is based on interpersonal relations, states and needs of modern society, passion and desire to conquer new soul territories. His piano stories are all about the people around him. Listen to his music, it is the perfect soundtrack for your life. ----- Teo Milea is the first pianist to perform at NATO Headquarters in Bruxelles and also, the first pianist to perform his own work on the stage of the International Ballet Gala in Dortmund. His music is streaming on international radios from Romania to France and the United States. ----- FAQs - Are there ID requirements or an age limit to enter the event? 10 + - Where can I contact the organizer with any questions? E-mail us at contact@teomilea.com - The name on the registration/ticket doesn't match the attendee. Is that okay? Yes, as long as you have previously notified us via e-mail

My Piano Stories in Toronto