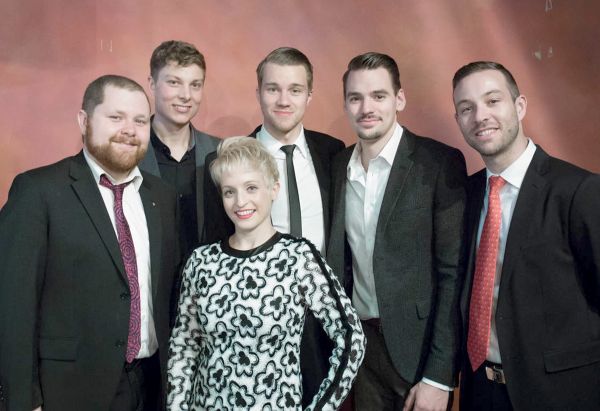 Formed in 2006, The Woodhouse is a group of long-time friends from Toronto’s Humber College who, each December, came together to play shows in their home province of Nova Scotia. Drawing on jazz and holiday classics, they created their own “little big band" to wow audiences with some unique arrangements. About to enter their 11th year of sold-out shows, The Woodhouse continue performing across Canada while receiving regular airplay on CBC Radio and JAZZ.FM 91 Toronto. The Woodhouse’s debut album, Home For Christmas, was nominated for ‘2015 Jazz Recording of the Year’ by Music Nova Scotia. It’s an homage to the golden era of jazz with a modern new twist and special guests such as Canadian jazz legend Don Thompson. The Woodhouse is thrilled to be joined by guest vocalist Barbra Lica for their very first London appearance on December 15th. Based in Toronto, Barbra is a fast-rising star on the Canadian Jazz scene, who has received high praise for a vocal ability that stresses subtlety and grace, and an on-stage demeanor that is utterly delightful. She was a big hit at the TD Sunfest ’15 Jazz Village and was eagerly welcomed back for an April 2016 date in the Sunfest World Music & Jazz Series. Barbra recently released her third album, I’m Still Learning. The lineup for The Woodhouse’s inaugural Sunfest show is: Barbra Lica - vocals; James Ervin - trumpet; Nevin Dunn - saxophone; Matt Giffin - piano; Soren Nissen - bass; Will Fisher - drums.