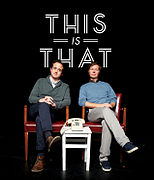 CBC's This Is That

Featuring: CBC's This Is that

CBC's This Is That, This is That is a news satire program broadcast on CBC Radio, which airs comedic news stories presented in the style of a real CBC Radio public affairs program.[1] The program began as a summer replacement in 2010,[1] returned in the summer of 2011, and was added to the regular schedule in the fall of 2011.[2] It is hosted by Pat Kelly and Peter Oldring, and produced by Chris Kelly. The program, whose style has been compared to The Onion, has drawn phone calls from listeners who did not realize that they were listening to a comedy program and took the content seriously; Oldring and Kelly admit to having been surprised that listeners would be fooled. In June 2010, the National Post reported as fact that CTV purchased the set of the NBC series Friends; this, however, was a satirical story by This Is That. Two years later, esteemed Canadian journalist Robert Fulford wrote an article for the National Post claiming that the show is "worth tuning in for". Also in 2012, Public Radio International reported as fact a This Is That story that dogs in Montreal would have to know commands in both English and French by law. In early 2013, Harper's reported as fact a This Is That story in which a Canadian student "sued her university for failing to accommodate her allergies to cactuses, escalators, tall people, and mauve." In September of the same year, several media organizations, including USA Today and the Washington Times, reported on a story about an U-11 organization that had decided to play soccer without a ball to remove competition from the game. In 2014, Jonathan Jones at The Guardian wrote an article analyzing the satire in their story about a New York artist creating invisible art and selling it for millions.

CBC's This Is That