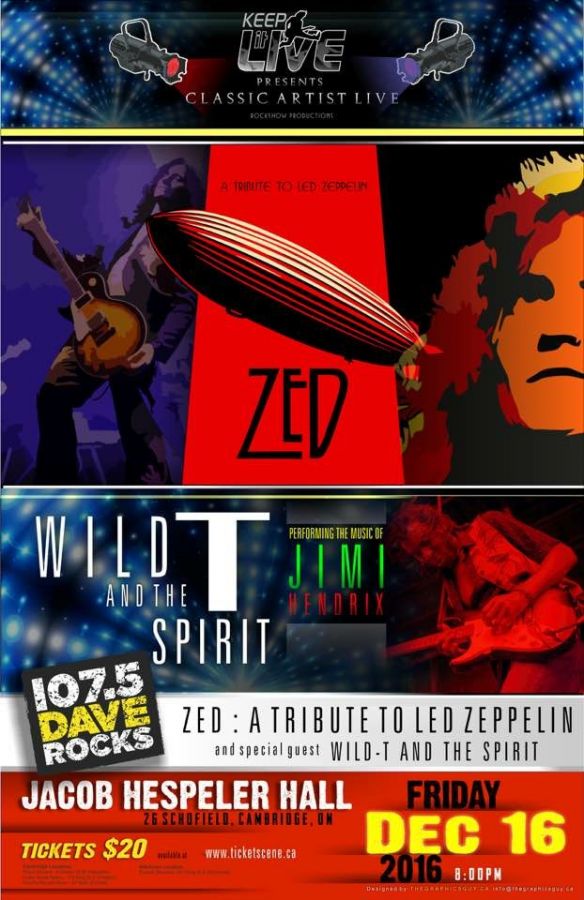 Keep It Live & 107.5 Dave Rocks, Presents!!!! """"""""""""""""""""""""""""""""""""""""""""""""""" Zed - The Led Zeppelin Experience https://m.facebook.com/groups/674977689218762/?view=group Wild T & The Spirit- The Jimi Hendrix Show http://www.wildt.ca/ Special Guests, Seven Sunday's https://m.facebook.com/Seven-Sundays-Cambridge-152895241548415/ ZED is Canada's premier Led Zeppelin tribute, capturing the magic of the studio recordings with a powerful live concert experience to remember. Wild T & The Spirit (Performing a Special Jimi Hendrix Show!) An Absolute DELIGHT to work with, a lyrical, lilting take on Hendrix" ... DAVID BOWIE "I followed him around like he was a Messiah.... Tony's been my idol for years" ... JEFF HEALEY "If this were 1966, we would be witnessing the discovery of the Wild T Experience" ... RIFF'S, SWINDON UK Guitarist Toney Springer has hung with the best of them. David Bowie, Jeff Healey, BonJovi, Jay Leno, David Letterman, Arsenio Hall. These are a few of the personalities that have been blown away by Toney’s music. Tony aka Wild T took his name from his home town of Tunapuna, Trinidad .Though one may find similarites to Jimi Hendrix, Lenny Kravitz & Eric Gales, ironically it was Toney’s exposure to Steve Howe (Yes) that inspired him to pick guitar. Moving to Toronto in his teens Toney quickly gained a reputation on the club circuit…in the mid eighties , after being in Toronto for a few years , Toney was voted best guitarist @ the Canadian Black Music Awards and has not looked back since. Jeff Healey saw a man with an endless imagination, ‘ a man who could combine that imagination with an emotion that you couldn’t help but feel. I just followed him around like he was a messiah, I probably learned more from Toney than from anyone else, Toney’s been my idol for years’. Healey wasn’t the only one who noticed Tony’s rapid ascension through the ranks… David Bowie chose Toney to be his guitarist on his Black Tie White Noise cd after seeing ‘T’s video "Midnight Blues" on a tv show while in Toronto with Tin Machine, subsequently Toney appeared with Bowie on Leno, Letterman & Arsenio Hall & Bowie’s ‘the making of Black Tie White Noise ’dvd prominently showcasing Wild T. ‘an absolute delight ’said Bowie. Seven Sunday's Classic rock band Cambridge Ontario .Hard edge covers of the greatest hits of the golden age of Rock. Alice Cooper, Bowie,T Rex, Thinn Lizzy,Deep Purple , Friday Dec. 16 Jacob Hespeler Hall Cambridge ON Tickets $20.00