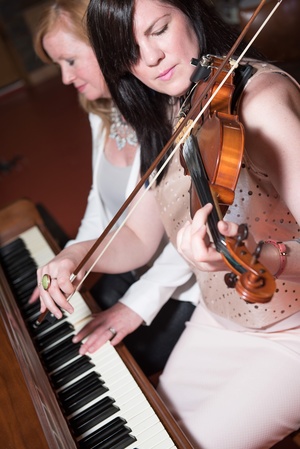 Sisters, Erin and Colleen Searson have developed their own original style of high energy fiddling, passionate vocals and step dancing. The sisters perform on a variety of instruments throughout their live show which includes Colleen on fiddle, vocals and Ottawa Valley Step Dancing while Erin performs on piano, vocals, Ottawa Valley Step Dancing and tenor guitar. Rounding out the live show is Danno O’Shea - performing and composing for over 17 years on drums and percussion with a jazz degree from Humber College - and bass/guitar player Fraser Gauthier, who has studied at Humber College and Capilano University, gradually gravitating towards roots music. Their latest album, Stars Above The Farm (2015) is a 12-track album that has brought the sisters back to their musical roots. Writing both vocal and instrumental tracks, the album is a nod to their upbringing in such a rich and vibrant musical culture. The album was recorded at Skylark Studios with Jordon Zadorozny as Producer. Two highly acclaimed Canadian Fiddle champions join Colleen on the album. April Verch, on the track Cuddy's Waltz which was wriiten by Colleen & April Verch. And, Voyageurs, is a lively traditional style set where Pascal Gemme joins Colleen for a few Quebecois tunes.