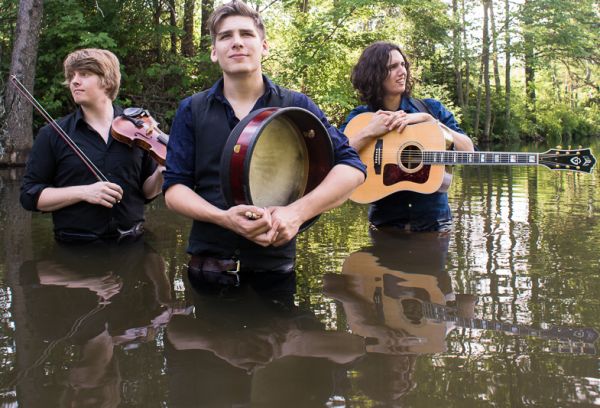 Ten Strings And A Goat Skin is a bilingual folk/fusion trio from Prince Edward Island who present traditional and original music inspired by their Atlantic Canadian histories and roots, and infused with pop and world rhythms. Age-old entertainments–sitting around the fire, telling tales–can take on ever-new faces, transforming tradition with vigor, curiosity, and sparks of goofy humor. Released in June 2016 Auprès du Poêle (“around the woodstove") was voted Album of the Year in the Penguin Eggs Magazine critics poll. Expanding on the Scottish and Acadian roots of PEI’s traditional music, Ten Strings and a Goatskin weave old-school Franco-Canadian, Breton, Irish, and Scottish tunes with wickedly current grooves and clever quirks, flirting with indie’s best moments. “We’re less anchored in traditional structures, the way many players assemble dance sets," remarks Rowen Gallant, one of the trio’s string players. “We’ve left them by the wayside. We retain the melodic elements, but we’re not opposed to messing with things." Working closely with producer Leonard Podolak of Grammy and Juno-winning eclectic roots favorites The Duhks, Ten Strings and a Goat Skin push their music into new territory, adding B3 and crazed pump organ, clever effects and taut vocal harmonies, for a rich sound with a direct, funky edge.