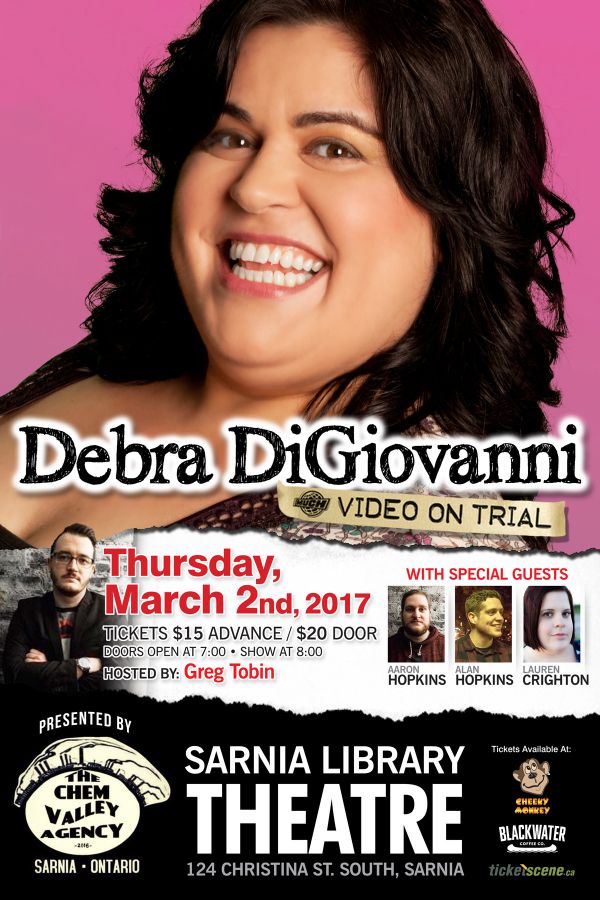 On Thursday March 2nd come out to The Sarnia Library Theatre for a night filled with hilarious, gut-wrenching comedy from one of Canada's funniest female comedians; Debra DiGiovanni with supporting act Mark Bennett plus special guests Alan Hopkins, Lauren Crighton & Aaron Hopkins and the night will be hosted by Gregory Tobin with the show starting at 8PM SHARP. Tickets will be available at Cheeky Monkey & Blackwater Coffee Company on Friday January 27TH for $15. Comedian Debra DiGiovanni has been called the “Best Comedian to see after a Messy Break Up" and for three years running-she was named Canada’s favorite female comedian, as well as being named her hometown Toronto’s favorite comic for another three years. Debra’s comedy has a sharp edge while maintaining a playful, happy air. And her persona is one of the best developed of any comic working today- couple that with a hilarious act that is so personal everyone can relate- and you see why Debra is so popular. Her humor and charm lies in her unflinching honesty and openness, and rapid-fire delivery. She began her career in 2000 and she’s made leaps and bounds in the comedy world- already with two Canadian stand up specials for CTV/Comedy network, she taped her first set on Comedy Central with her ‘Live at Gotham’ recorded in New York City. Since, she’s taped comedy segments for ‘Gotham Live’ and ‘Stand Up in Stilettos’ in Los Angeles as well as ‘Stand and Deliver’ for NuvoTV. She was also a finalist on the 5th season of NBC’s hit show Last Comic Standing season 7-making it to the Top 8 comedians. She was even awarded a Canadian TV award –a Gemini- for best-televised comedy performance of 2010. Debra’s a favorite at the Montreal Just for Laughs Comedy Festival, and will be attending in 2015 for the 10th time. She’s done comedy festivals around the world- including the Glasgow Comedy Fest in Scotland, as well as the Just For Laughs festival in Sydney Australia. You can often hear Debra on CBC radio’s ‘Debaters’ program and, Debra has become a nationwide favorite on the hugely popular Much Music show ‘Video On Trial’, which can now be seen on FUSEtv and Debra debuted in the independent film Unlucky and her first stand up DVD for the Showtime Network- was produced with her management team (Levity Entertainment Group) “Single, Awkward Female." It is now playing on Netflix. In winter of 2014- she completed her first solo national tour, with Just For Laughs- ‘The Late Bloomer Tour’ crossed Canada with 21 cities-as the first solo female comedian toured by Just For Laughs. You can see Debra on the comedy network’s revival of Match Game, a Canadian revamping of the 70’s game show, where Debra is a popular panelist. Debra also can be seen on PlayboyTV- on their comedy channel. She now makes her home in Los Angeles.