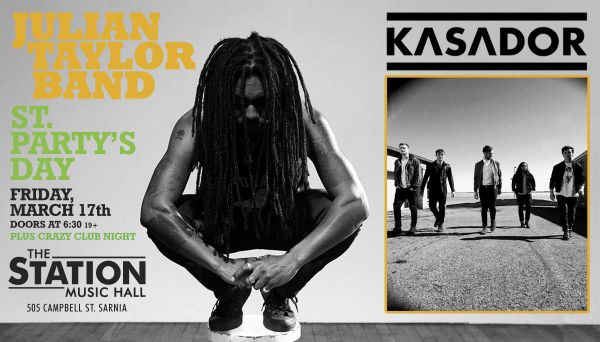 DON'T MISS THE BEST ST. PARTY'S DAY IN SARNIA! What a pleasure it is to find in the monoculture of the current musical moment a group of musicians bold and talented enough to be various. In an era when music lovers seem to be required to like one thing, one style, one genre we get the protean of the Julian Taylor Band confident enough in their own abilities to delimit the genres and let the soulful beats resound from wider horizons. Here we have rhythm and blues, hard rock, thoughtful folky songs, and even a little hip-hop. In one way it signals something new —an exciting amalgamation of musical styles too long held apart. But in another way it’s a return to roots – the roots of the Toronto sound. You can’t listen to this album and not recall that Toronto has always been “the meeting place". And just as many tribes and peoples always came through the nexus of this landscape so the musical tribes have continued the tradition. Not surprising then that this collection of songs erupts from the same musical epicenter that gave us Blood, Sweat & Tears, The Band, and Buffalo Spingfield hand-in-hand with cultural heavies like Neil Young, Gordon Lightfoot, Steppenwolf and Joni Mitchell. Julian Taylor is a natural heir to this rich tradition– something he shares with two other proponents of the Toronto sound, Drake and The Weekend. His music arises naturally from deep steeping in the historically mixed musical milieu that begat it. It has the comfortability of an open mind a wide palette and an experienced and inspired musical talent. So, welcome to the smorgasbord. I think you’ll find it very flavourful. Or as the song says “Ooh that spice is nice." Hmm WWW.JULIANTAYLORBAND.COM Kasador: On September 13th, Kasador released their much anticipated self-titled debut EP. Recorded at The Tragically Hip’s studio (The Bathouse) in Bath Ontario with Engineer/Producer Nyles Spencer (Half Moon Run, The Tragically Hip, Arkells, The Trews), and was mixed by Juno award winning engineer Dan Brodbeck (The Cranberries, Ivory Hours) and mastered by Noah Mitz (Arkells, The Constantines, Broken Social Scene). The EP has had a strong reception, with radio play from The Edge (Toronto), CBC Radio 1 and The Drive (Kingston) with their songs 'Neighbourhood' and 'Talk About It'. http://www.kasadorband.com/