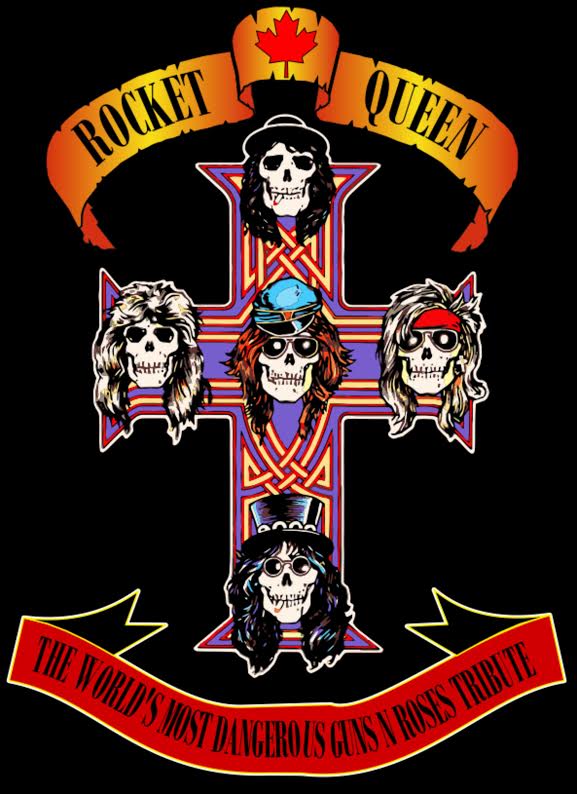 From London, Ontario Canada a love and passion for Guns N' Roses brought together five musicians who share one goal. To put together the greatest Guns N' Roses tribute band on the planet. A recreation that spans all eras of the bands life. From the early days of Lies, all the way up to Chinese Democracy, Rocket Queen pays tribute to all eras of GN'R with band members that look, act, and sound like their heroes they are portraying. From the moment the boys hit that first bar of Sweet Child O' Mine there chemistry was instant and they knew they captured lightning in a bottle: Ryan Thomas: Everything about Ryan (Axl) Thomas screams rock star. From the look, the sonic screams, down to his charisma, Ryan is Axl Rose. Jeremy Christopher: Jeremy (Slash) Christopher is the lead guitarist and main gunslinger in Rocket Queen. Every ounce of him pays tribute to his hero, Slash from the classic look, the swagger, down to every detail of every solo recreated without flaw. Joe Bonasia: Joe (Izzy) Bonasia has been playing in rock bands since he was old enough to hold a guitar. His love and passion for all music is instantly seen the second he strums a chord. There is no other guitarist out there with a better ear for music. Jay Bartlett: Jay (Adler) Bartlett is the heartbeat of Rocket Queen. Influenced by his hard hitting heroes Dave Grohl, and John Bonham, he hits with the power of Adler and the precision of Sorum. Jay's beat is felt by all Gary Publicover: Gary (Duff) Publicover is the groove and soul of Rocket Queen. The power behind his bass is matched only by his vocal talent