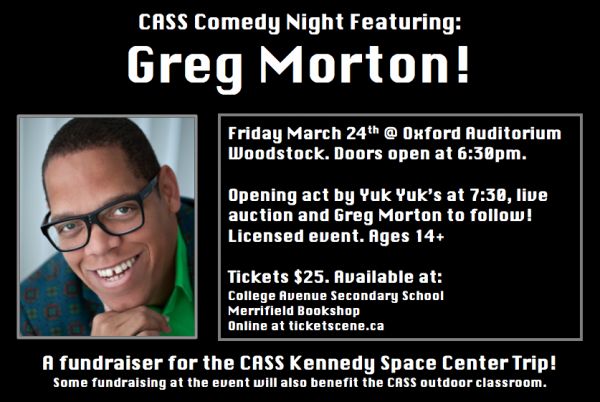 Greg Morton is returning to his hometown of Woodstock for one hilarious night of comedy! Teamed up with opening act (Yuk Yuk's star) Dom Pare, this evening is not to be missed. This event is licensed, and due to content from the comedians, is restricted to those ages 14+. Pizza will be available for purchase. There will be a live and silent auction at the event. The comedy night is a fundraiser for the CASS Kennedy Space Center Trip! Some fundraising at the event will also benefit the CASS outdoor classroom. Greg Morton's bio: The graduate of College Avenue Secondary School had only two choices in schoolyard conflicts. Learn the ways of the force, or use his wit to diffuse situations. That wit would soon lead to winning first prize in the, ‘So You Think You’re Funny Contest’ and the beginning of his stand-up comedy career. This former mobile disc jockey, who used to play songs at weddings, now sings song parodies on nationally syndicated radio shows, like the Bob and Tom Show. Take his Obama Man, sung to the tune of Candy Man, which has racked up over 4 million hits on YouTube. Since the debut of his two minute Star Wars mash-up on Just for Laughs and Comedy Central, he has gone on to entertain audiences worldwide opening for Celine Dion and Luther Vandross at Radio City Music Hall. A noble choice of career young Padawan. Trading light sabers for laughs. This way, no one looses an arm.