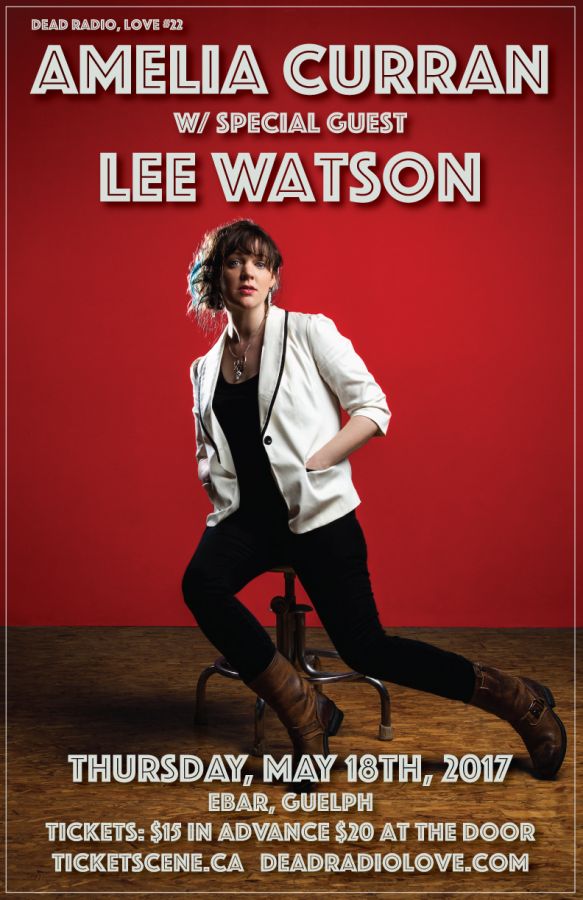 Dead Radio, Love #22 - Amelia Curran and Lee Watson @ the eBar! It's our first Guelph DRL in a while, but that doesn't change the fact that we are so very excited to be bringing you these two amazing Canadian talents! Amelia Curran (John’s, Newfoundland) http://www.ameliacurran.com Amelia Curran is a Juno-Award winning songwriter, activist and mental health advocate from St. John’s, Newfoundland. Curran’s music is distinguished by her intricate and elliptical lyrics, geologic in their resilience and oceanic in their depths. Over the course of a decade, Curran has built a shoreline of song, a place of radical, perpetual collision of matter and form. Even as she leads us to the ever-eroding lip of the abyss, Curran’s music helps us make sense of the heart’s imperceptible, relentless attrition. Watershed, Amelia Curran’s newest album, marks a threshold, a shake-up, a directional change. The tenor of this new album is openness (not to be confused with optimism), a reflection in part of Curran’s increasingly public efforts to battle the stigma of mental health issues in the arts. As a whole, the album calls for compassion and unification as a breakwater against the sea of cruelties we inflict upon each other, and upon ourselves. In keeping with Curran’s off-stage commitment to raising her voice, Watershed is co- produced by Curran and replete with songs that speak to themes of vocalization. Curran establishes a core feminist dimension to Watershed’s theme of speaking up with “Gravity" and “No More Quiet," two of the album’s standout – and vigorously feminist – songs. “Gravity" is a two-and-a-half-minute precis accented by horns and bass-y power chords. On this song, Amelia’s noted lyricism gets a shot of feminist rock grit – think Chrissie Hynde meets Ron Hynes. “No More Quiet," is a powerful take down of gender tokenism, and slams the door on those who perpetuate inequality with a soaring soul outro by the larger-than-life vocals of blues singer Shakura S’Aida. Lee Watson (Elora, Ontario) https://leewatsonmusic.com LIKE A BRUSHSTROKE ACROSS A CANVAS, LEE WATSON’S SONGWRITING SWEEPS THROUGH MUSICAL LANDSCAPES, WARM AND KNOWING. For the better part of a decade, Lee wrote and performed as a founding member of Vancouver’s critically acclaimed The Breakmen. In this new solo project, he brings his influences in traditional music back home to his roots in rural Ontario, creating a collection of songs that evoke a sense of awe and reverence for the windswept pines and vast lakes of Ontario’s Hinterland. Born in Owen Sound, Lee’s love for Canadian songwriters and the sound of music on vinyl was sparked by a childhood raised within arms reach of his father’s turntable. $15 in advance, $20 at the door. Tickets available at ticketscene.ca AA/Lic