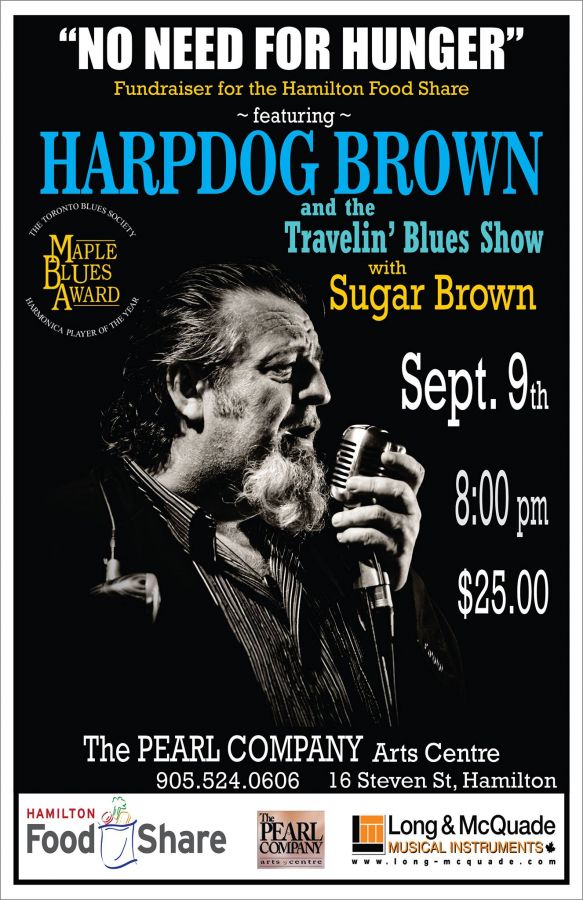 Harpdog Brown The TRAVELIN' BLUES SHOW with Sugar Brown: Saturday, September 9. Doors: 7:30. Show: 8:00. $25 –online or at door. Maple Blues award-winning Harpdog Brown is happily touring his authentic Travelin' Blues Show in support of his new ground-breaking album Travelin' WithThe Blues. Canada's premier 'old school' harp wizard has never sounded better.  He arrives with Sugar Brown whose dark, sweet, and inconsolable blues has brought him much attention and many awards. Sugar Brown’s blues originated while at the University of Chicago. By day, he studied; by night he learned to play the blues on Chicago’s famed West Side.  And now, he’s an Associate Professor of East Asian Studies at the University of Toronto by day and he’s still playing those blues by night.
This concert supports Hamilton FoodShare. A percentage of the proceeds and 100 percent from the raffle/silent auction will go directly to FoodShare. Long Mcquade have donated a 7 Harmonica Kit. What a night! Bring food! Bring a donation! There will be a cash bar.  www.harpdogbrown.com  www.SugarBrownMusic.com
"Harpdog's got a smokin' band playing and he's singing the real deal, old school blues just like you want to hear it.” Charlie Musselwhite.
“Harpdog's effortless vocal delivery is a rare and natural gift.” Holger Petersen.