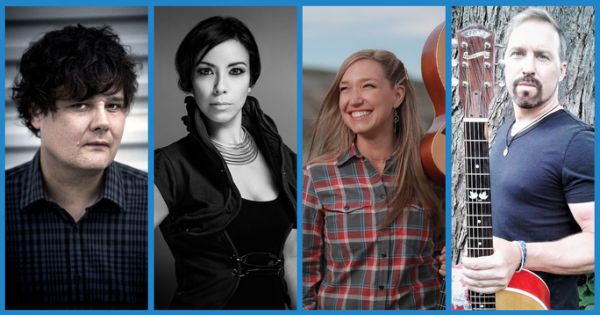 Join some of Canada's most talented songwriters performing their songs and sharing the stories behind them. This Concert-in-the-Round will feature a night of music and conversation with performances by Ron Sexsmith, Dayna Manning, Emm Gryner and Jason Barry.

Ron Sexsmith holds the status as one of the greatest songwriters of his generation, having worked with some of music’s most celebrated producers—Daniel Lanois, Mitchell Froom, Tchad Blake, Ray Kennedy, Martin Terefe, Bob Rock and Jim Scott. Sexsmith is a rare songwriter able to extract profound meaning from even the most mundane aspects of urban life, while simultaneously lamenting what remains of our simpler past. https://www.youtube.com/watch?v=banLXmX9ml4

Emm Gryner is a Canadian independent singer/songwriter, bassist and pianist with 10 albums to her credit. Nominated 3 times for a Juno Award, she has performed around the world as a solo artist and has also sung in David Bowie’s band and on recordings by Rob Zombie. In Q Magazine, U2’s Bono named Emm’s song “Almighty Love” as one of 6 songs from the past 20 years that he wished he had written. Emm runs her own label, Dead Daisy Records. https://www.youtube.com/watch?v=cKWa2dKrYWQ

Don't miss this intimate show with Canadian songwriters! You will receive preferred seating if you arrive early for dinner. Revival House offers a 3-course dinner before the show for $49 /person. Seating is according to reservation bookings so call in advance to reserve a table if you are coming for dinner. If you reserve late you may be seated at a table with other participants.