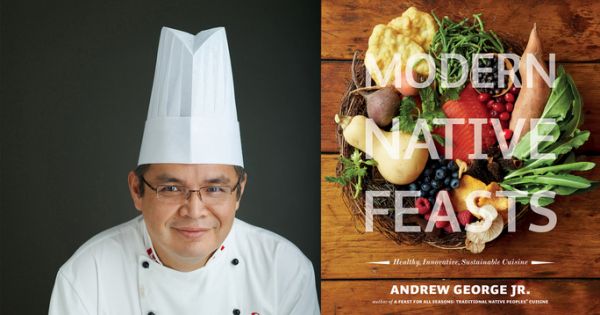 Chef Andrew George Jr. brings the rich traditions of indigenous cuisine into the modern world with his books Modern Native Feasts and Feasts for all Seasons. He states, “Aboriginal people have a strong tie to the land and to their traditions, and it has been my goal to fuse these traditional values with modern and innovative cooking techniques.” Join us for an evening filled with traditional teachings and the following menu:

Chef Andrew George Jr. is the Stratford Chefs School's 2017 Joseph Hoare Gastronomic Writer in Residence, a member of the Wet’suwet’en Nation in British Columbia, and author of Modern Native Feasts and Feasts for all Seasons. He was a participant on the first all-Native team at the Culinary Olympics in Frankfurt and chef delegate on a US State Department initiative called “Culinary Diplomacy: Promoting Cultural Understanding Through Food.” George also teaches Native students to cook and develops Native menus for restaurants and hotels.