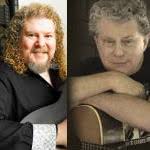 Joe Jencks is an international touring performer, songwriter, entertainer, and educator, based in Chicago. From Carnegie Hall and Lincoln Center in New York, to coffee houses, festivals, spiritual communities, and schools, Joe Jencks has spent the last 18 years touring full time. His songs have traveled to every continent via his own performances, radio, CDs, web casts, and other musicians. He is noted for his unique merging of musical beauty, social consciousness, and spiritual exploration. Jencks weaves a diverse web of stories with brilliant musical skill, ensnaring even the most rigid of hearts, inviting them to open. His songs invite us to live inside of our passions and our beliefs. He recently was part of the trio Brother Sun. Joe's latest CD is Poets, Philosophers, Workers & Wanderers.

“In a world rife with many talented songwriters, Si Kahn stands alone.” – Bluegrass News. Si’s 18th CD Bristol Bay was released on June 15th, 2013, produced by Jens Kruger of the Kruger Brothers. It was the #1 CD for July on the international Folk DJ List, the fourth of Si’s CDs to win that honor. Si himself was named the #1 Artist, with the most airplay for the month. At the annual Folk Alliance International conference in February 2011, Si was publicly honored with a special Triple Crown Award for being the #1 Artist, and having the #1 CD and #1 Song for 2010. His songs have been translated into at least half a dozen languages, and covered by the likes of Kathy Mattea, Peggy Seeger, Planxty, Dick Gaughan and The Fureys.