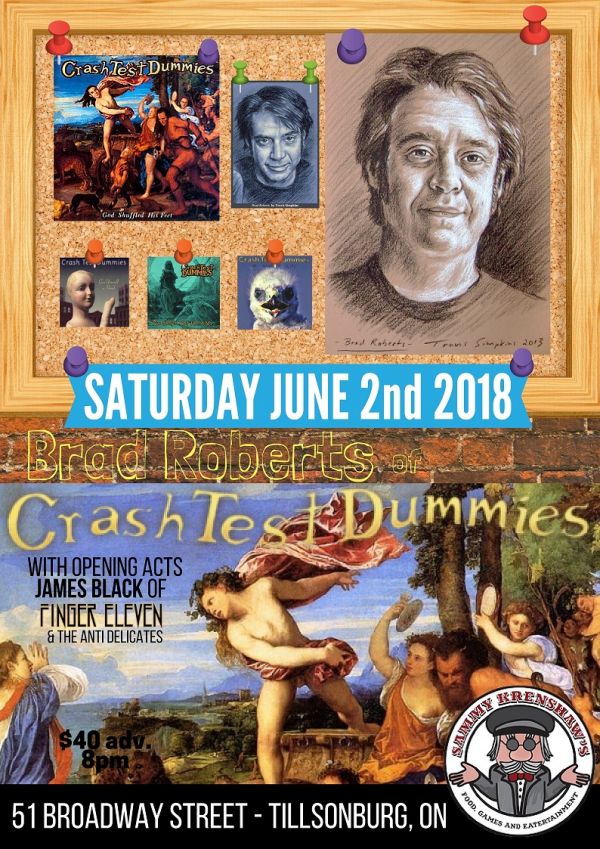 The voice of the Juno winning Grammy nominated band Crash Test Dummies comes to Sammy Krenshaw's (51 Broadway St. - Tillsonburg, ON) on Saturday June 2nd 2018!
BRAD ROBERTS of CRASH TEST DUMMIES
There is no mistaking Brad Roberts' voice. He may look like an average guy but then he opens his mouth and his majestic baritone voice immediately conjures fond memories of such Crash Test Dummies hits at "Mmm, Mmm, Mmm, Mmm" and "Superman's Song." Perhaps best remembered for the acerbic folk rock sound of 1991's The Ghosts That Haunt Me and 1993's God Shuffled His Feet, there have nonetheless been enough hits for the band over the years to merit a couple of greatest hits packages. Through it all, the band with Roberts at the helm has touched on funk and soul, folk, electronic music and even Christmas tunes. Yet it is Roberts' voice and offbeat lyrical sensibility that have been this beloved band's calling cards since their founding twenty years ago.
Keep A Lid On Things (Official Video):
https://youtu.be/42IL0O6pPqQ
Mmm Mmm Mmm Mmm (Official Video):
https://youtu.be/GaUqpnHvua8
"Weird Al" Yankovic parody Headline News (Official Video) :
https://youtu.be/dU95v23MQ4c
Official Website: http://www.crashtestdummies.com
w/
James Black (of Finger 11)
The Anti Delicates
EARLY BIRD GA : $35
General Admission: $40