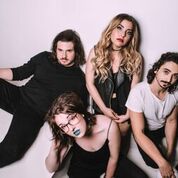 + Special Guests TBAThursday May 31st 2018The Mansion (506 Princess Street)19+$10 ADV (Tickets Available Online Friday) $12 Door.With a boundless, frenetic energy, Toronto’s MONOWHALES (formerly Ginger Ale & The Monowhales) have built a reputation as one of the most memorable and energizing up-and-coming bands in Canada.Exploding onto the scene with a DIY ethos and an unforgettable live show, MONOWHALES first made waves with their breakout single “Home” in August 2016. A love letter to their hometown, the song and video quickly became a viral hit. While the song garnered over 122,000 streams on Spotify and radio play across Canada, the video would go on to be viewed over a million times and land the band appearances on Global News, CP24, and CBC Radio One.Known best for their live performances, MONOWHALES have shared the stage with Coleman Hell, The Beaches, The Pack AD, and Kardinal Offishall to name a few. In June of 2017, the band partnered with Facebook Inc. to live-stream a performance debuting new material at the Facebook Canada offices in downtown Toronto