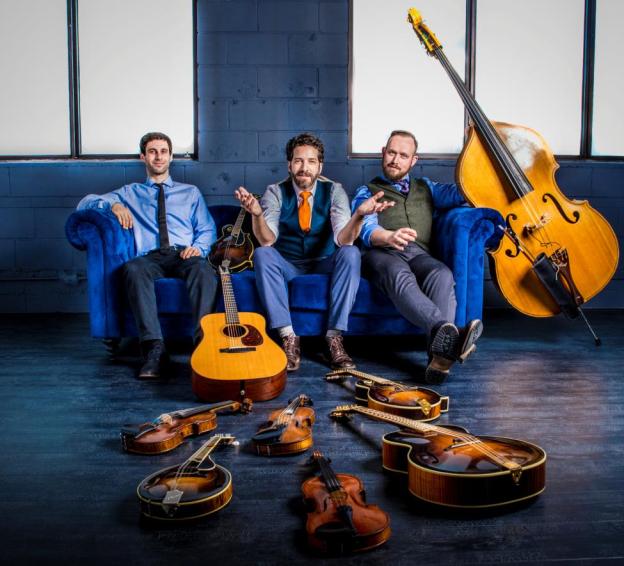 Mando maestro Andrew Collins finds himself – through no actual fault of his own – at the epicentre of Canada’s burgeoning acoustic/roots music scene. He didn’t invent it – but he's certainly been a contributor, having co-founded seriously noteworthy Canadian bands like the Creaking Tree String Quartet, the Foggy Hogtown Boys and, more recently, his namesake Trio. That’s not to mention the fact that this prolific, robust performer – comfortable on mandolin, fiddle, guitar, mandola and mandocello – composes, produces, arranges, writes and teaches across multiple genres, including a popular collision of folk, jazz, bluegrass, celtic, and classical.

As Collins gathers up innumerable JUNO nominations (5) and Canadian Folk Music Awards (7) won by his various ensembles, he’s zeroing in on the work he does with Trio-mates: fellow string guru Mike Mezzatesta, whose versatility shines through on guitar, mandolin, fiddle and mandola, and in-the-pocket James McEleney holding it down on the bass, mandocello and vocals. Showcasing a dizzying number of styles and instruments on stage, Collins and Co. appear to live by the old adage, “idle hands are the devil’s workshop”, likely keeping them just ahead of his grasp. Bending and blending genres, these musical shape shifters land somewhere between the re-imagined worlds of Béla Fleck and Newgrass invader, David Grisman.

They just released a new double album, grafting 11 vocal cuts (tongues) to 11 instrumentals (grooves) to create a seamless finish with their cleverly monikered double album, Tongue & Groove. Each cut is milled to perfection and represents a back-to-basics visitation on what the band does best -- spontaneity of the stage and rapid-fire, improvisational exchanges.