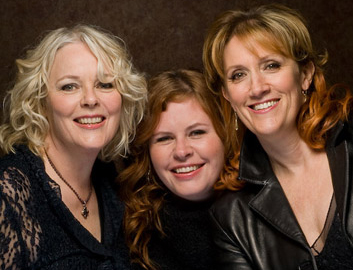 The Marigolds (presented by Cuckoo's Nest)

Charismatic! Gwen Swick, Suzie Vinnick and Caitlin Hanford, three of Canada's top singer/songwriters, have combined their talents to form the Marigolds. Accompanied by drummer Randall Coryell, the Marigolds are part bluesy, part jazzy, and part traditional country and bluegrass, specializing in angelic harmonies and gutsy playing. Delivering with skill and grace, the Marigolds are a roots-music supergroup in full bloom.

In 2010 the Marigolds were nominated for Vocal Group of the Year at the Canadian Folk Music Awards. The Marigolds have performed at concerts and major festivals across Canada, including Mariposa, Home County, Blue Skies, Folk Harbour in Lunenberg, Nova Scotia, Northern Lights, Folk on the Rocks in Yellowknife, and the Vancouver Island Music Festival.

The Marigolds pack a diverse repertoire with a winning delivery. Each Marigold brings a unique gift to the musical table and, as a group, they run with it. They have fun on stage, and it shows.The past several years have witnessed the joy audiences have found in the Marigolds music and, thus, their rise in the Canadian roots music arena.

The Marigolds have a genuine affection for the timeless and classic genres of traditional country and bluegrass, Appalachian ballads and the blues. They celebrate this rich history on their second Juno-nominated CD, That's the State I'm In. The fourteen original songs are an inspired journey through lost love, found love, redemption and optimism.

All members of the Marigolds also enjoy solo careers. As well, Suzie performs with Rick Fines and Betty and the Bobs, and Gwen and Caitlin perform with Quartette alongside Sylvia Tyson and Cindy Church.

The Marigolds (presented by Cuckoo's Nest)