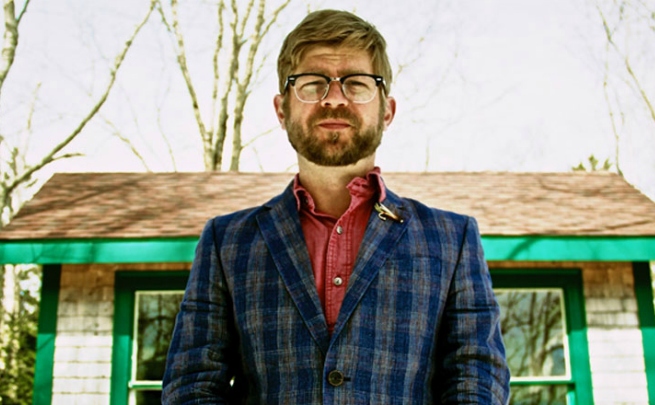 “You can’t fake a work of heart,” Luedecke sings in “The Girl in the Pearl Earring,” the second song on”Domestic Eccentric”, and the assured confidence of that line, the assertion of a straightforward truth, is the guiding principle behind the entire album. Old Man Luedecke is the real thing, a modern-day people’s poet and traveling bard and balladeer. He’s played around the world to a loving and increasing fan base, and won two Juno awards in the process. Tim O’Brien is a multiple grammy-winning roots multi-instrumentalist whose solo work and collaborations have made him one of the most respected American players working today. The two last worked together on Luedecke’s 2012 release, “Tender is the Night”, which was nominated for a Juno, listed for the Polaris Prize and won Album of the Year at the East Coast Music Awards.

Not since Loudon Wainwright III has anyone written so honestly, so openly, or with such aching tenderness and good humour about family life. “Saving up for date night so we can have our fight” “The Early Days”. But Luedecke has always insisted on a solid poetic heft in the way he uses words, and highly personal stories are what have always connected him to the universal in his audience. Recording with Tim O’Brien in an intimate setting at home has yielded an album where the songs take the starring role.

Calling to mind the powerful force at the heart of other musical vocal pairings: The Milk Carton Kids, Gillian Welch and David Rawlings, Tony Rice and Ricky Skaggs, or even Tim O’Brien and his work with Darrell Scott, the combination of Old Man Luedecke’s highly personal songs and infectious old-time banjo and guitar, and Tim O’Brien’s mastery of bluegrass harmony, guitars, mandolin, bouzouki, and fiddle adds up to much more than a simple sum of parts.

As the title suggests, “Domestic Eccentric” is mostly a record about home. It’s about what it means to be a still-youngish man, what it’s like to still be in love with the woman you married a decade ago, about what it’s like to watch your own babies grow to children, and about the joys and sorrows attendant upon the milestones of parenthood. “You got to hold on, it goes so fast, these early days they don’t last” “Early Days”.

A record so replete with home seemed impossible to make anywhere else. So Old Man Luedecke fitted out his back woods cabin, a hand-hewn affair he’d built himself from rough-sawn lumber, and hired a backhoe to make a 500 yard road through the record amounts of snow so he could bring in top-level recording gear. He invited Tim O’Brien to stay at his home with his family for a week of snowbound collaboration in Chester, Nova Scotia. This marks the third time that Old Man Luedecke and Tim O’Brien have collaborated on record, and their increasing comfort in each other’s musical presence has yielded spectacular results. “Tim is my favorite musician,” Luedecke says. “And working with him in a duet environment in a cabin at home was a waking dream.”

“I worked with people I loved and trusted,” says Luedecke when telling the story of “Domestic Eccentric”. “And the record, for me, is a rich portrait of personal friendships.” Along with Tim O’Brien, engineer John D. Southern Adams and vocalist Jennah Barry (who left her own dinner guests waiting while she sang on “The Briar and the Rose”) are both from nearby Mahone Bay. Drummer Nick Halley (James Taylor) lives even closer than that. In fact, the whole album is recorded live off the floor, with the exception of Samson Grisman, who was sad to have to record his bass parts in Nashville.

“It was a magical week,” according to Luedecke. “You bring a few great people together, these great talents, these amazing musical components. And then you watch all the pieces become this one amazing thing.”