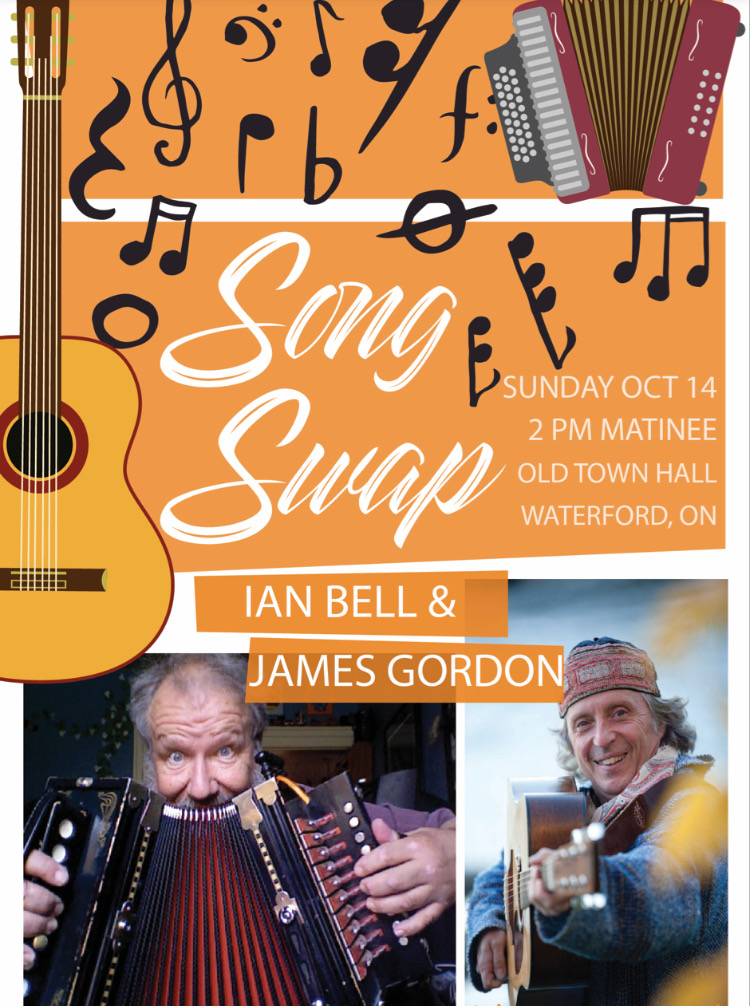 “Civil Service Songwriter” was a phase coined by Nancy White to describe her work on CBC Radio in years gone by. The same could be said of James Gordon and Ian Bell who between them, have contributed songs and stories to countless CBC programs including Stuart McLean’s Vinyl Café, Basic Black with Arthur Black, Fresh Air, Ontario Morning, Radio Noon and Peter Gzowski’s Morningside.

As well as their broadcasting work Ian and James each have had long and varied individual performance careers that have taken them from Ontario church basements to Lincoln Centre.

As a solo singer-songwriter and with the ground-breaking trio Tamarack, JAMES GORDON has released over thirty-five albums, and has toured relentlessly around the world. and for more than ten years was heard on CBC radio as songwriter-in-residence for the Basic Black and as creator of “Hometown Tunes” for  Ontario Morning.

With a repertoire that encompasses both traditional songs and original material, IAN BELL is as well-known as well for his storytelling as he is for his music. He has performed with Muddy York, The Friends of Fiddler’s Green and was a regular contributor to CBC Radio programs including Stuart McLean’s Vinyl Café and Fresh Air.

James and Ian are both known for a powerful sense of place in their songwriting and storytelling. In this special evening they will trade “gently used songs about Ontario” with their trademark perception and humour – not to mentions banjos, guitars, accordions and trumpets!

Be part of the fun as old musical friends sing for and with each other in an evening of great songs and stories.