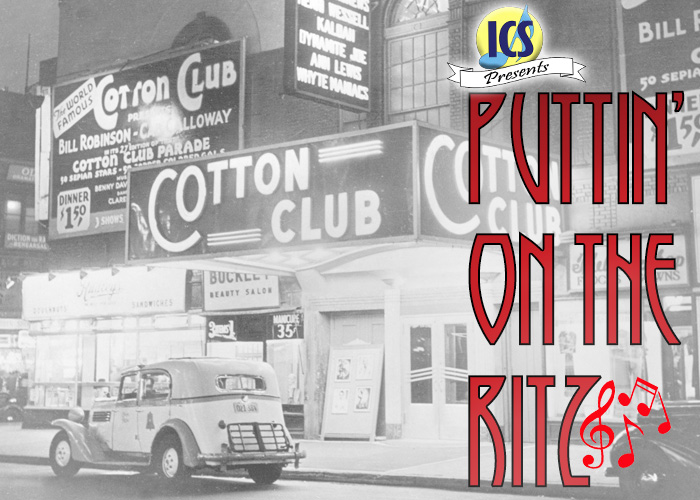 Puttin' On The Ritz [dinner theatre]

Nightclubs were a cultural mainstay during the Big Band Era of the 1940s. In major American cities, the most fashionable nightclubs were grand-scale venues featuring top performers, floor shows, ballroom dancing, showgirls and live orchestras playing jazz or swing music. The trendiest nightspots attracted a rich and famous clientele who created a stir beyond the cocktails, dancing and all-star entertainment.

Entertainers such as Jack Benny, Nat King Cole, Frank Sinatra,Milton Berle and Sammy Davis, Jr. put on three nightly shows, along with a cavalcade of chorus girls. Not to be outdone, actors and celebrities such as Humphrey Bogart, Lauren Bacall or Cary Grant could be spotted at the tables on any given night.

New York City nightlife flourished in the 1940s. The 'swing' jazz scene developed at venues such as Three Deuces and Onyx Club on West 52nd Street and Minton’s Playhouse in Harlem. Café Society was the downtown spot for up-and-coming singers like Big Joe Turner and Sarah Vaughan. The Latin-themed Copacabana, one of New York's most celebrated nightclubs, featured Desi Arnaz and Lucille Ball, opened in midtown Manhattan in 1941. Throughout the decade, famous entertainers headlined at the ritzy supper club, including Dean Martin, Jerry Lewis and Jackie Gleason.

You'll be entranced by songs from The Great American Songbook such as 'It Don't Mean A Thing If It Aint Got That Swing,' 'At Last,' 'I Got Rythm,' 'Swinging On A Star,' 'Chattanooga Choo-CHoo' and so many more.


Part of: Puttin' On The Ritz

Puttin' On The Ritz [dinner theatre]