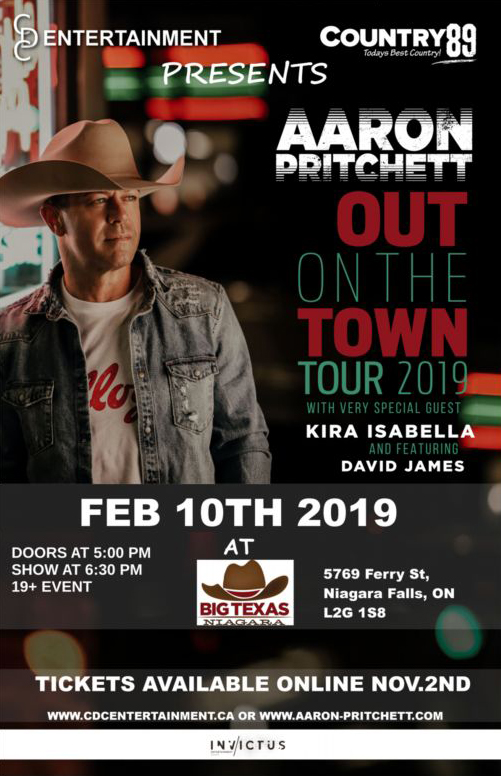 AARON PRITCHETT (OUT ON THE TOWN TOUR)

Following a triumphant year with his smash single ‘Worth A Shot’ and a packed summer festival season, multi-CCMA winner Aaron Pritchett heads into 2019 with the announcement of his Out on the Town Tour, kicking off with the release of his forthcoming EP Out on the Town on January 11th. Hitting the road with special guests Kira Isabella and David James, Pritchett will be taking the tour to over 30 cities across the country.

Pritchett’s tour announcement comes with the release of Out on the Town’s second single “Better When I Do,” available now at country radio. Following the success of his single “Worth A Shot,” that charted Top 10 at radio for four weeks straight, Pritchett’s new single will continue to please country fans combining his signature upbeat country licks with a story of free-spirited romance. ‘Better When I Do’ will be available everywhere November 23rd.

A mainstage staple in Canadian country music, Aaron Pritchett continues to adapt and evolve, while refusing to abandon the down-home sincerity in his music that has been his trademark since his career inception. Pritchett has become known for his charting anthems since his Top 10, GOLD-certified hit “Hold My Beer,” followed by the 2008 hit “Let’s Get Rowdy” and “Dirt Road in ‘Em,” the lead track from his #1 album The Score

AARON PRITCHETT (OUT ON THE TOWN TOUR)