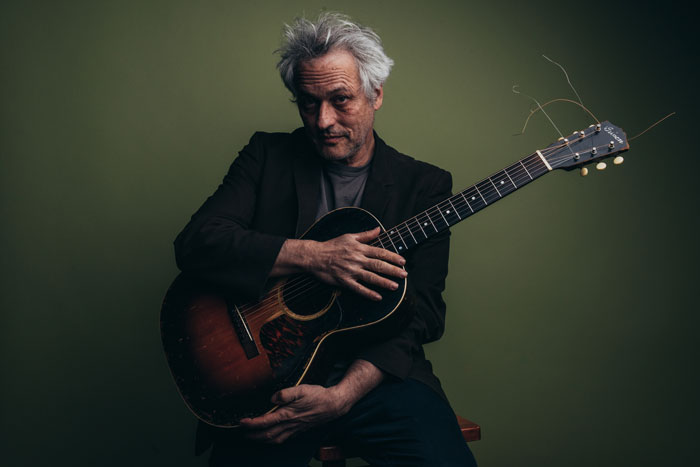 Marc Ribot, who the New York Times describes as “a deceptively articulate artist who uses inarticulateness as an expressive device,” has released 25 albums under his own name over a 40-year career, exploring everything from the pioneering jazz of Albert Ayler to the Cuban sonof Arsenio Rodríguez. His solo release, Silent Movies (Pi Recording 2010) has been described as a "down-in-mouth-near master piece" by the Village Voice and has landed on several Best of 2010 lists including the LA Timesand critical praise across the board, and 2014 saw the monumental release: Marc Ribot Trio Live at the Village Vanguard (Pi Recordings), documenting Marc’s first headline and the return of Henry Grimes at the historical venue in 2012 and included on Best of 2014 lists such as Downbeat Magazine and NPR’s 50 Favorites. 2018 sees the release of two politically charged albums: YRU Still Here? (Northern Spy), the long awaited third album from Ribot’s post-rock/noise trio Ceramic Dog, and Songs of Resistance (featuring guest vocalists Tom Waits, Steve Earle, Meshell Ndegeocello and more on Anti-Records) voicing anger and outrage during these turbulent times.

Kee Avil is a solo song project based in Montreal, QC. It combines guitar, voice and electronics into song forms that stagger between structure and improvisation. Kee Avil evolved from playing the guitar with broken cymbals and drumsticks into creating strange beats glued together by samples of screws dropped into crystal bowls.

This series is generously supported by Jazz Goes to College, the Trent University Music Society, and the Publican House Brewery.