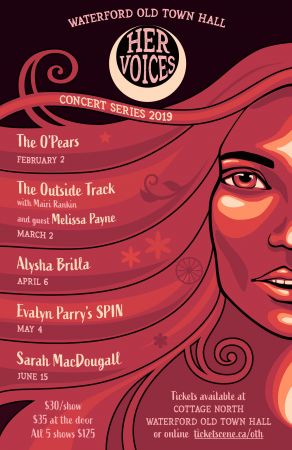 The Waterford Old Town Hall presents its 2019 Concert Series: Her Voices, a dynamic celebration of women in song.

The O’Pears are an award-winning, Toronto-based contemporary trio made up of Lydia Persaud, Jill Harris and Meg Contini, three songwriters who weave stories that stir the spirit and capture the timeless character of folk music. With beautifully blended harmonies, insightful songwriting, and a playful love of performing, they make perfectly balanced vocal performances seem effortless with their signature mix of tight a cappella and rootsy instrumentation.

Each member of The O’Pears is a distinctly talented musician with a stand-alone voice, style, and stage presence and together they are breathtaking. The O’Pears continue to bring a strong, honest voice to the modern female perspective.

March 2: THE OUTSIDE TRACK with guest Melissa Payne

Canada's own Mairi Rankin is joined by Scottish and Irish traditional artists Teresa Horgan, Allie Robertson, Fiona Black & Michael Ferrie to make up The Outside Track.

Winner of 'Best Group' in both the Live Ireland awards and the Tradition In Review awards, The Outside Track are one of the top Celtic acts in the world. They were 'Best Live Act' nominees in the MG Alba Scots Traditional Music Awards, and won the German Radio Critics Prize, for their album Flash Company. Live Ireland called them, 'Among the top bands in the world - stunning on every cut!'.

The Outside Track’s marriage of Celtic music, song and dance has been rapturously received around the world. Hailing from Scotland, Ireland, and Cape Breton, its five members are united by a love of traditional music and a commitment to creating new music on this as a foundation. They blend fiddle, accordion, harp, guitar, flute, whistle, step-dance and vocals with breathtaking vitality. Their blend of boundless energy and unmistakable joie de vivre has won them a large following around the globe.

Alysha Brilla is Canadian music producer and songwriter, with multiple JUNO nods & a place on the CBC music awards rising star short list. Her music, blogs and spirituality are inspired by growing up with parents from two different cultural and religious backgrounds; an Indo-Tanzanian father and Euro-Canadian mother. Her fourth, self-produced album "Rooted" culminates the spiritual & philosophical musings with upbeat folk/jazz/world sounds.

Brilla has performs internationally including across Canada, Australia, Singapore, Tanzania, Chile and beyond. Her world-influenced folk music bursts with colour and passion. In tandem to her singing career, Brilla conducts arts education workshops in schools; promoting diversity in music and mentoring in self-expression through the arts.

Evalyn Parry takes her audience on an uncommon theatrical and musical journey in Spin, her tour-de-force performance celebrating the Bicycle.
One part documentary and another part musical activism, Spin is inspired in part by the incredible true tale of Annie Londonderry, the first woman to ride around the world on a bicycle in 1895. Parry spins a fascinating web of stories that travel from 19th-century women’s emancipation to 21st-century consumer culture, peeling back layers of history to reveal a surprising and contemporary heart to her theme of liberation.

A vintage bicycle, hooked up to simple electronics and suspended in a mechanic’s stand, is played – from fenders to spokes to vinyl seat, from whirling pedals to bells – by percussionist Brad Hart, providing a captivating sonic accompaniment to parry’s songs and monologues. Staged by award-winning director Ruth Madoc-Jones, with stunning visual projections by acclaimed designer Beth Kates, this unique show has delighted audiences across the continent.

“…a welcome breath of fresh air….SPIN makes something beautiful out of taking your life into your own hands”  GLOBE & MAIL

“Annie Londonderry’s story becomes a portal into Parry’s own life and heart and that is what gives the show such resonance.” CALGARY SUN

“…this magnetic artist and her winning production team invest the work with such intelligence and playfulness, it’s hard not to be charmed.  NOW MAGAZINE

“a show with as much heart as it possesses design and brains.” CALGARY HERALD

Described by the magazine Rootstime in Belgium as ‘One of the greatest talents of our era”, Yukon- based 2-time Western Canadian Music Award winning artist Sarah MacDougall is respected and admired for her honest and poetic songs, passionate performances, and unique voice. Born in Sweden, Swedish magazine Noejesguiden declared her “One of Sweden’s best singer/songwriters”. The Globe and Mail touts her as a ‘Thoughtful, strong, and spiritual' performer.

Stepping outside of traditional folk and flirting with sounds that could have come from The Postal Service or Kate Bush, MacDougall keeps the acoustic guitar central and strong, but layers her sound with heavier drums and richly textured strings and synths.

MacDougall writes about identity, love, fear, hope, growing up, rootlessness, and forgiveness. Her songs are written from the point of view of the hopeful outsider, trying to carve out their place and make sense of the world.

Sarah has played festivals including Iceland Airwaves, Winnipeg Folk Festival, Edmonton Folk Festival, The Great Escape, and she has been featured on CBC’s vinyl Café. She has had her songs featured in the TV series The Vampire Diaries, and has toured, opened for and shared the stage with artists such as the Cat Empire, Lee Harvey Osmond, Bruce Cockburn, Tallest Man on Earth, Passenger, and many more