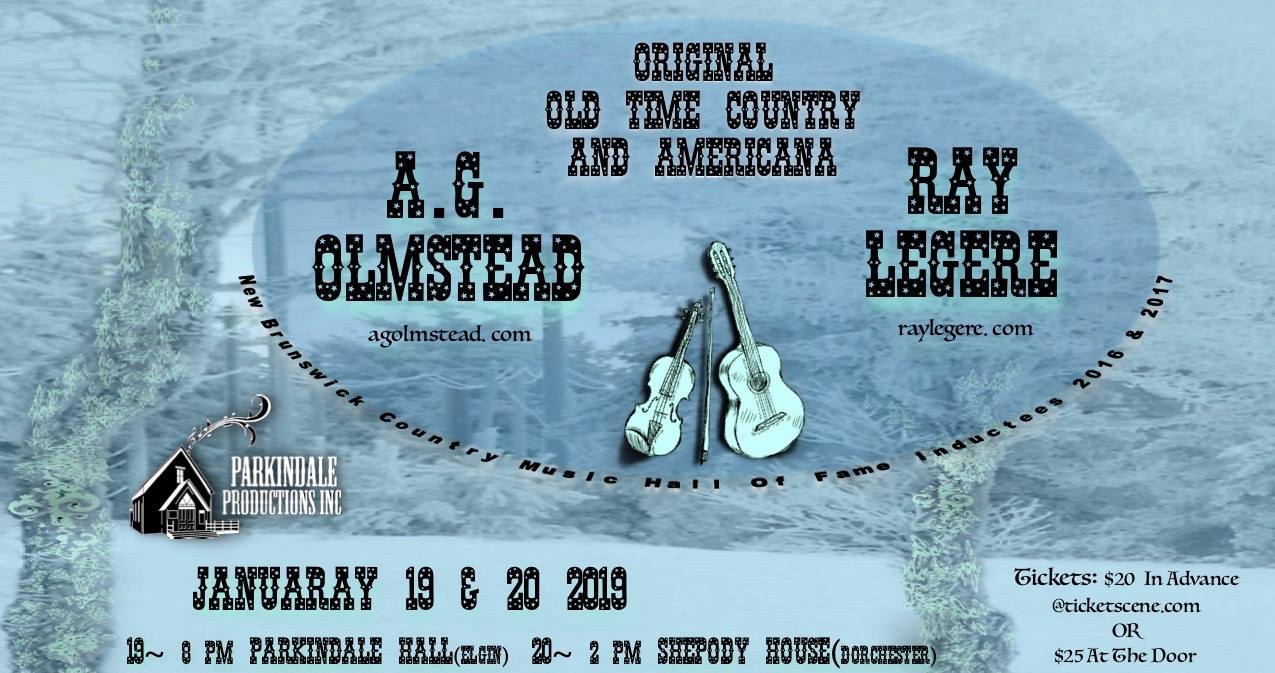 A.G. OLMSTEAD is a East Coast Canadian singer-songwriter and multi-instrumentalist in Old Time Country, Bluegrass and Americana genres. His three full length albums feature members of the Grammy Award winning Nashville Bluegrass Band and an array of today’s finest A-List pickers. He has performed on stages throughout Canada, the US, and Europe. Wandering the streets of New York City, guitar in hand, he began busking in his teens and continued to “hobo” throughout those formative years practicing his art and shaping the imagery that would become his lyrical style.Olmstead is known for his in-depth study of the Carter Family and other early 20th century rural recording artists. He draws inspiration playing honkytonk piano, oldtime fiddle/mandolin, and blues harmonica/guitar. His music has been featured numerous times on CBC radio and covered by artists around the world. In 2017 he became one of the youngest inductees into The New Brunswick Country Music Hall Of Fame. Olmstead calls Nashville his second home, performing most recently at Hoedown On The Harpeth bluegrass festival in TN with his full band. He is currently preforming his original music as a duo in small theatres and house concert venues throughout the Maritimes with Canadian fiddle legend RayLegere.

RAY LEGERE is the 2016 New Brunswick Country Music Hall Of Fame Inductee as well as being the 2003 ECMA Winner for "Bluegrass Artist Of The Year" which he also won in 1996. The Amherst, Nova Scotia native is known as one of Canada's premiere fiddle/mandolin players. Ray is a five-time winner of the Eastern Division Bluegrass Awards in the categories of Mandolin and Fiddle " Player of the Year", honors which have distinguished him with a "Masters Award" for each. The first year of the awards he captured a total of three, including guitar and was recently awarded the Masters for "Best Fiddle Player" in the Central Canadian Bluegrass Awards. Ray, although not wanting to be a contest player, was selected winner of the 1983 Open Mandolin Championship in Woodstock Ontario, winner of the 1986 Open Mandolin Championship in Winfield, Kansas, and winner of the 1989 Old Time Fiddle Championship in Sackville, New Brunswick. He scored among the top ten in Nashville's Grand Masters Fiddle Championship in 1990 and in Napean, Ontario's 1990 and 1991 Grand Masters Fiddle Championships. Ray has accomplished many accolades, the most notable playing a concert filling the shoes of an ailing Bill Monroe, the father of Bluegrass Music in 1982. His love for Bluegrass has found him playing alongside his heroes, David Grisman, Sam Bush, Tony Rice, Jerry Douglas, Tony Trischka, Doc Watson, Bela Fleck, ... and is well respected amongst them. Ray has recorded on hundreds of sessions and presently has seven solo projects of his own. "I am proud and thankful to be making music my profession and I hope that in striving to be the best I can be, you will enjoy my music for years to come. Thank you."