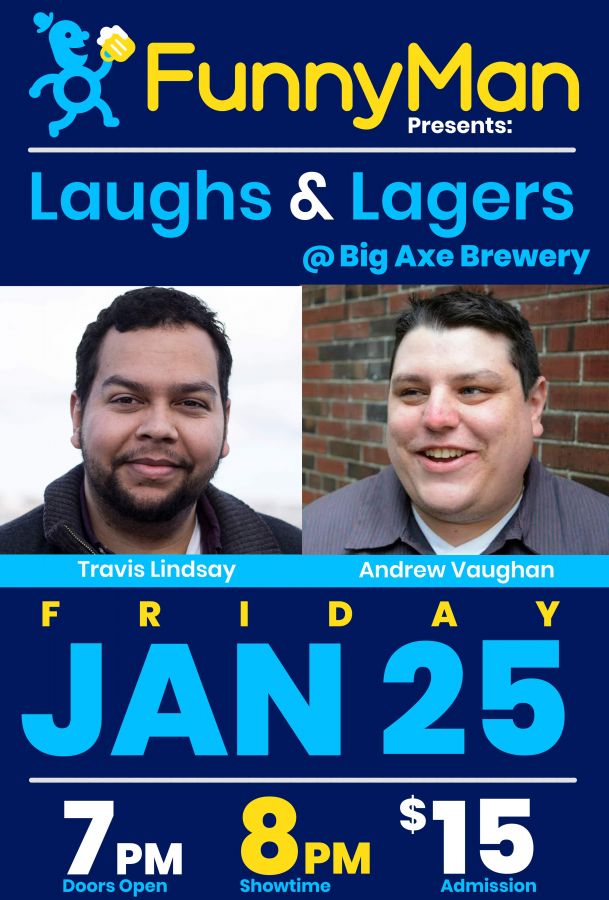 Big Axe and FunnyMan Inc. present "Laughs and Lagers at Big Axe Saloon". After a long week at work laughter is a must. Tickets are $15.00 and $20 at the door.

Travis Lindsay, originally from Halifax, Nova Scotia, is a Three-time semi-finalist in Canadas Next Top Comic (2011, 2013, 2015) He has performed at the Halifax Comedy Festival ( 2012, 2013. 2015) and was a Coast magazine Halifaxs Favorite Comedian of 2013 nominee. Performed at the Border City Comedy Festival in 2014 , The Hubcap Comedy Festival in 2016 where he won the CBS comedy competition and just won James Mullinger''s comedy boot camp where he was crowned of each of the funniest people in Nova Scotia. He was in the sketch troupe Father Problems, Which won the Bite TV sketch award. Written and performed with Dave Thomas (SCTV, Arrested Development) on the Second City Stage and has coached and played improv for the Canadian Improv Games. He also once met Rosa Parks.

Andrew Vaughan is an aspiring comedian and writer from Halifax, Nova Scotia. Andrew started out in radio with CHSR 97.9 FM in Fredericton hosting many shows including the Barry award winning "Wine, Women and Song". Since returning to Nova Scotia, Andrew has been working with Matt Dagley and staring in Deathbox Productions short films like "Andrew Vaughan at Hal-Con 2011". He also has his own podcast with Adam Noble known as the "The Double A Podcast" and he has been doing stand up at Amateur Nights in Halifax since 2010.