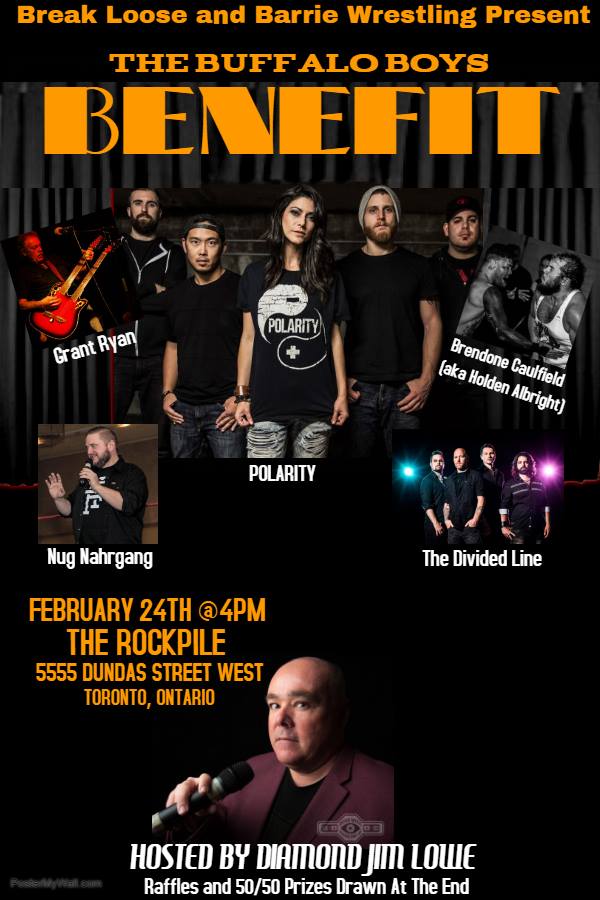 A SET BY POLARITY
https://www.facebook.com/PolarityMusic/

A SET BY CHURCH ON SUNDAY
https://www.facebook.com/churchonsundayband/

A SET BY THE DIVIDED LINE
https://www.facebook.com/dividedline/

IMPROV BY NUG NAHRGANG (OF AFTERMATH ON SPORTSNET) AND OTHERS
https://www.facebook.com/nugnahrgang

4-4 packs of tickets for a game of laser tag at Laser Quest. Donated by Ryan Preiano of Richmond Hill Laser Quest

MORE TBA
____________________
This event is being put on in conjunction between Break Loose Entertainment and Barrie Wrestling.

On the night of Sunday, January 6th, the Buffalo Brothers (Nick Pufpaff, Kevin Bennett, Danny Garcia and Kevin Lockwood) were involved in a serious car accident driving back from doing what they love the most - wrestling. They've sustained several serious injuries including broken bones and head injuries.

The boys and their families would be extremely grateful for any financial assistance at this time. They've experienced severe trauma, both mentally and physically and will need help getting through this recovery process - which will include not being able to work for some time. 100% of money raised at this event will be paid forward into the gofundme page that is already active for these guys.

Their social media handles, if you'd like to send your love:

Buffalo Boys Fundraiser will be at The Rockpile Nightclub in Toronto, ON on Sunday, February 24, 2019.Doors at 4:00PM, and the Show Starts around 4:30PM. Buffalo Boys Fundraiser includes POLARITY, The Divided Line, Nug Nahrgang Improv, Brendone Caulfield Comedy and Magic, Grant Ryan, Church On Sunday. The Rockpile Nightclub is located at 5555 Dundas Street West, Toronto, ON.