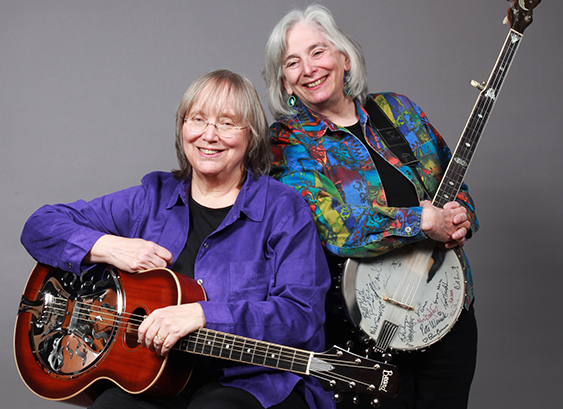 TWO-TIME GRAMMY® Award Winners, Cathy Fink & Marcy Marxer are master musicians with a career spanning over 35 years. Their superb harmonies are backed by instrumental virtuosity on the guitar, five-string banjo, ukulele, mandolin, cello-banjo, and many other instruments. An eclectic folk festival on their own terms, their repertoire ranges from classic country to western swing, gypsy jazz to bluegrass, and old-time string band to contemporary folk including some original gems. Their versatility defies a brief description, perhaps “well rounded Americana” does it best. Billboard Magazine commented, “As close to flawless folk/bluegrass as it gets.”

“Possibly the most popular act of the weekend was the American duo Cathy Fink & Marcy Marxer, who held a capacity crowd spellbound with their traditional and contemporary songs, and even the odd yodel.” — Western Leader, Auckland, New Zealand (Auckland Folk Festival)

“They are spellbinding acoustic musicians, with a rare mastery of American roots styles. Parents will be as entertained by the sublime musicianship and droll lyricism as kids are by all the musical mischief.” — The Boston Globe

In February 2017, Cathy & Marcy released their 45th recording, “GET UP AND DO RIGHT”. The album features duets of some of their favorite songs by songwriters such as Alice Gerrard, Tom Paxton, Ola Belle Reed and David Francey, with an original tune and song for good measure.

The Washington Area Music Association has recognized the duo with over 60 WAMMIE Awards for folk, bluegrass and children’s music. They have performed with Pete Seeger, Theodore Bikel, Tom Paxton, Patsy Mon-tana, Riders in the Sky and a wide range of musical luminaries. Cathy & Marcy have performed at hundreds of bluegrass and folk festivals and taught at close to 100 music camps.

Christine Lavin wrote on her website following the Philly Folk Fest: “Marcy Marxer and Cathy Fink played a killer set on the big stage on Friday night. They played so fast their hands were a blur. They are two of the best performers you’ll see anywhere. Again, the crowd went wild.”