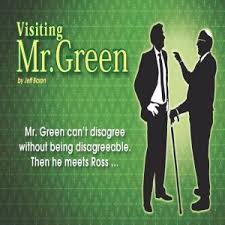 Visiting Mr. Green: A play by Jeff Baron: May 2 to 5 and 9 to11. Evenings: Doors: 7:30pm. Show: 8:00. Matinees: May 5 and 11- Doors: 1:30pm. Show: 2:00 pm. Tickets: $20.
Mr. Green, an elderly, retired dry cleaner, wanders into New York traffic and is almost run down by a car driven by Ross Gardiner, a 29-year-old corporate executive. The young man is given community service helping the recent widower once a week for six months. What starts as a comedy about two men who do not want to be in the same room together becomes a gripping and moving drama as they get to know each other. Howard Jerome is Mr. Green and Daniel Schneiderman is Ross Gardiner. Presented by Snapping Turtle Productions & The Pearl Company. Directed by Sandi Katz, Produced by Enid Aaron & Dan Penrose Translated into 22 languages, with over 200 productions in large and small venues, Mr. Green has won numerous best play and best actor awards throughout the world.

“Baron tells his tale with discerning freshness and originality. One of the best shows around” - Chicago Daily Herald


Part of: Visiting Mr. Green: A play by Jeff Baron: