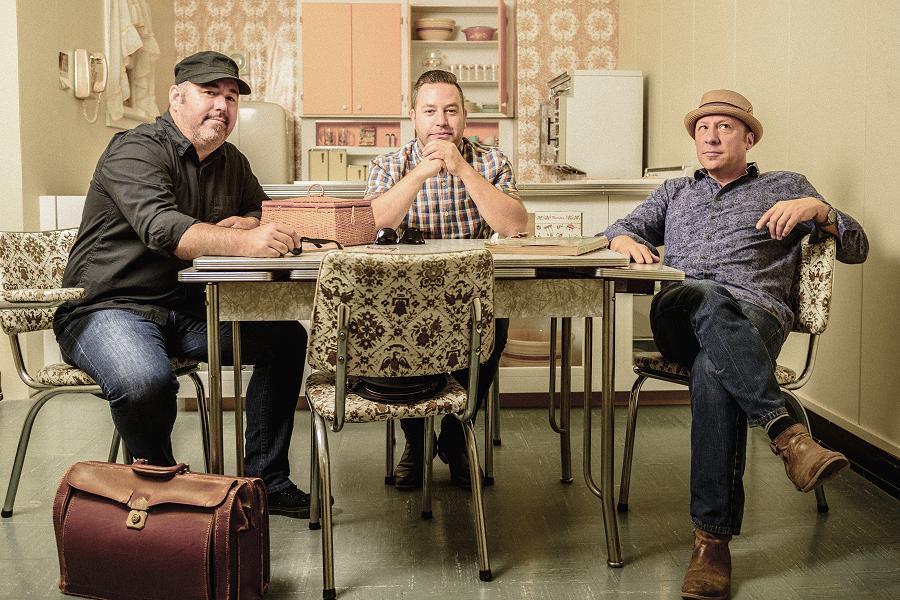 By almost any ordinary metric, like a marriage or a job, 10 years is a respectable milestone. For a hard-touring and recording band, however, a decade is a sweat-soaked, anecdote-amassing feat. Appropriately, the corresponding anniversary gift is way better something made of tin.

Winner of 2018’s Blues Album of the Year Juno Award (their second overall), the latest and fifth release from singer/guitarist and harp player Steve Marriner, drummer Matt Sobb, and guitarist Tony D is precisely the kind of corker you’d expect from a trio of musical veterans who, between them, have boosted luminaries from Fabulous Thunderbird Kim Wilson to Buddy Guy, the late Jeff Healey to the lamented Stevie Ray Vaughan.

Bluesmen don’t come more accomplished than the dudes in MonkeyJunk. But don’t take our word for it.  Check out one of the band’s thrilling live gigs this spring and summer as part of #MJ10 Tour. Click here or scroll down for a full tour itinerary (http://monkeyjunkband.com/tour).

“What an amazing journey we’ve enjoyed together,” Marriner enthuses.  “This little band that could has travelled the world and brought our music to a dozen countries. It’s hard to believe 10 years has passed already.  What fun! We’ve had the privilege to visit nearly every corner of Canada and perform our tunes for so many amazing people. It’s been an honour to share this adventure with two of my best friends.”

Launched in Ottawa in 2008, MonkeyJunk —handle inspired by delta blues great Son House, who once intoned, “I’m talking about the blues, I ain’t talking ’bout no monkeyjunk!” — have consistently updated contemporary blues with a blistering mix of chops, soul, grit, humour and harmony.

MonkeyJunk plays for keeps, as evidenced by the 10 electrifying tracks on their latest album, their first ever to feature bass guitar.  “We wanted to push ourselves to work hard and to work efficiently and focused — to see what we could come up with in a shorter period of time,” drummer Sobb explains of Time To Roll. “The result is a brash, groovy-as-always collection of songs that show where the band has been and where we have arrived in many years of writing, recording, and touring.”

In addition to the above-mentioned pair of Juno Award wins (out of three nominations), MonkeyJunk has also netted an impressive 21 Maple Blues Awards, two Canadian Independent Music Awards, and a Blues Music Award (USA) for Best New Artist, for 2009’s sizzling Tiger In Your Tank.  And while that recognition is swell, all band members agree that the real thrill of playing in MonkeyJunk is just that — playing, especially live, where the music’s ecstatic sway on crowds is right there to behold.

Tony D, says, “Tempus fugit, as they say when you’re having fun. Has it really been 10 years? It still feels like the 1st time when ever we hit the stage. What I dig about our sound is how it has evolved from our love of the blues, which brought us together in the 1st place, 10 years ago.

That’s one of the unique things about MJ, where we’re respecting the traditions of all roots music and giving it a modern approach.”

“We are so proud of MonkeyJunk’s history of creating (mostly) original music,” Sobb says.  “We’ve made five albums in 10 years and it has been a unique honour and pleasure that they are all released on Stony Plain/Warner Canada. What a great ride it has been!”

Adds Marriner, “MonkeyJunk is very proud to be part of the Canadian blues community. It is rich and deep and sprawls from east to west.  There are incredible singers and musicians in every corner of this country who have their own style and identity and who write compelling, relevant music. We look forward to catching up with them all on our upcoming #MJ10 tour.”

MonkeyJunk has won a collective 21 Maple Blues Awards, two Canadian Independent Music Awards, a Blues Music Award (USA) in 2010 for best new artist debut (Tiger In Your Tank), and have been nominated three times for a JUNO Award, winning the award twice for Blues Album of the Year in 2012 for To Behold and in 2018 for Time To Roll.

“The name MonkeyJunk comes from Son House, who once said ‘I’m talking about the blues, I ain’t talking ’bout no monkeyjunk.’ But I am going to talk about MonkeyJunk – they are brilliant and have produced one of the best albums I have heard in a long time…; Ten tracks that prove that this Canadian band is here to stay. And as Son House would have said if he had seen these boys: ‘I’m talking ’bout the blues, I’m talking about MonkeyJunk!'” – Bob Boncey, Blues Matters (UK)

“MonkeyJunk are keeping the spirits of Muddy Waters and the other roots giants alive with their own unique brand of music. Check it out – you won’t be disappointed.” – David Wilcox

“Loved your CD, some really cool tunes – It is one I find myself listening to over and over again” – Ritchie Hayward, Little Feat