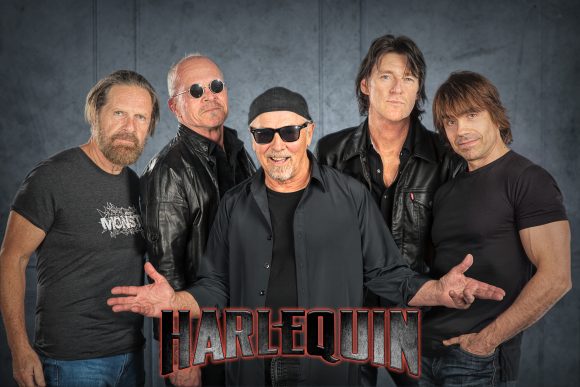 "A Classic Double Header"
Harlequin and Prism will share the stage for one night only!
$40 in advance and $50 at the door if there are any left.
Must be 19 years or older to attend.

Harlequin was originally formed in the mid-seventies. After several demos and trips to Toronto, Harlequin was finally discovered playing in a tiny bar in Toronto by representatives of Jack Douglas, legendary producer of Aerosmith, Patti Smith, and John Lennon. Ironically, the scouts for Douglas’ company had actually intended to see Goddo, the band playing downstairs, but were turned away due to a sold old show. Instead, they retired upstairs to a much smaller bar – only to be blown away by the band, playing a high-energy set of strong original songs for only a handful of people. This chance meeting led to a production deal with Douglas.

With Douglas’ help, Harlequin signed a deal with CBS/Epic (home to Cheap Trick and Eddie Money) in 1979. The band proceeded to amaze everyone at the label by pushing the first release Victim of a Song (1979) to gold status through sheer hard work, incessant touring, word of mouth and solid song-writing. Songs like “Sweet Things In Life”, “You Are The Light” and “Survive” introduced the band to radio in many markets in Canada – especially Western Canada.

The second release, Love Crimes (1980), came with a bigger push from the label, and went on to go Platinum, powered in part by Harlequin’s biggest hit to date “Innocence”. Another track, “Thinking Of You”, became a staple of rock radio and a highlight of the live show.

One False Move (1982) cemented the band’s radio success with tunes like “I Did It For Love,” “Superstitious Feeling” and “Heart Gone Cold.” The fourth and final album, eponymously titled, featured a change of direction as well as producer – Alfie Agius, the former bassist with The Fixx, replaced Jack Douglas. This album produced one single “Take This Heart” and the band’s only video, filmed at the abandoned Don jail in Toronto by Juno-winning Champagne Productions.

Harlequin was, and still remains, something of a work-horse of the Canadian road, soldiering through multiple grueling cross-Canada tours, and working with such bands as Triumph, Streetheart, Nazareth, Heart, April Wine, Pat Benatar and Saga. Saga took the band to Puerto Rico, where they discovered – to their shock and amazement – that “Innocence” had been a huge hit single. To capitalize on the song’s success, the band played in Caracas, Venezuela, headlining two nights at the city’s biggest arena. With Triumph, the band toured through the States and made some headway in the midwest and Texas.

The next album was the Radio Romances greatest hits package, which also featured a new tune (written by Tom Cochrane) entitled “No Mystery”.

“Waking the Jester” was released in 2007. It had two singles which touched every continent of the world, “Shine On” and “Rise”.

In 2009 the band released “On/Q” the first live compilation. Original singer, George Belanger, is proud to release the songs in the style and intent in which they were written and which he had always preferred. Songs representing the band from inception to 2009 are included.

Unlike many bands of their era, Harlequin is still a staple of rock radio in Canada, where the band’s old and new hits still receive remarkable amounts of airplay. Fueled by this continued success at radio, the band still tours, gaining new fans all the time, and attracting anyone who loves Canadian rock at its finest.

Prism's Bio
NASA chose Prism’s “Spaceship Superstar” as the official song aboard Space Shuttle Discovery during its historic final flight, which speaks to Prism’s ongoing popularity, even in outer space! Meanwhile, back on earth:
They’ve sold millions of albums, with songs that have become radio standards – Spaceship Superstar,
Take Me to the Kaptin, Flying, Armageddon, Take Me Away, Young & Restless, Night to Remember,
Don’t Let Him Know among them. Prism itself is classic rock.

With two Juno Awards (Canada’s Grammy) for Album & Group of the Year, multi-platinum albums and a continuing legacy of sold-out shows, Prism is a must-see live attraction. The band rocks out the hits more energetically than ever, thrilling audiences nationwide.

Every day across the country, radio is playing the many Prism classics. Combine unstoppable world-class concerts, and the best may be yet to come.