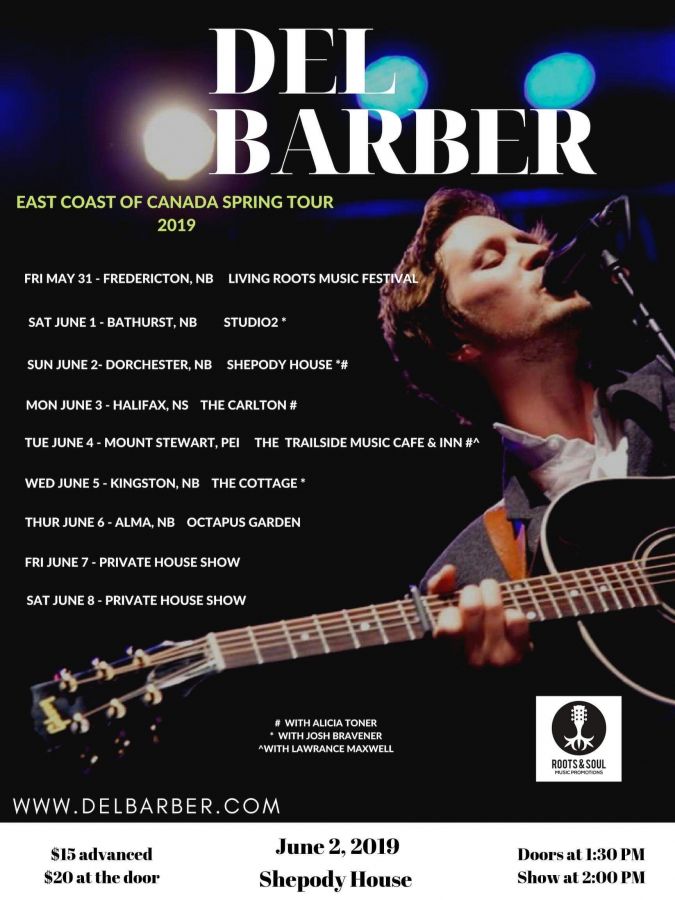 Del Barber is a real Canadian troubadour from Manitoba. He will be bringing some new songs with him from his up coming release "easy keeper"

Doors at 1:30 PM
show at 2 PM
$15 advanced/$20 at the door
Joined by:
Alicia Toner
and
Josh Bravener of The Hypochondriacs

Del Barber is a singer-songwriter from Manitoba, whose winsome balladry and wry wit harken back to country-folk traditions that remind the listener of the late greats of songwriting history. Del Barber is no stranger to finding inspiration in the cultural backdrop of Canada. On the JUNO Award-nominated Prairieography, Barber documented stories of prairie life, highlighting the unique relationship between struggle, hard work and love.

With new songs to share, Del is back on the road reconnecting with fans across North America anticipating the launch of his new album 'Easy Keeper' in 2019.

A child of the East Coast, Alicia Toner writes songs that tell the truth. Her americana blend of folk, pop and country-rock offers a unique melody-driven sound built around her eloquently emotive voice. Alicia’s debut album “I Learned the Hard Way” made waves with it's earnest, heartfelt songwriting and earned her Music PEI’s SOCAN Songwriter of the Year Award as well as numerous other nominations and critical acclaim. Produced by Tim Chaisson (The East Pointers) and Stuart Cameron (The Heartbroken), her new single “Dangerous Home” delves deeper into the well of truth. Both epic and personal, it signifies an exciting new direction for a truly remarkable artist with a unique ability to convey common stories and emotions to which we can all relate.