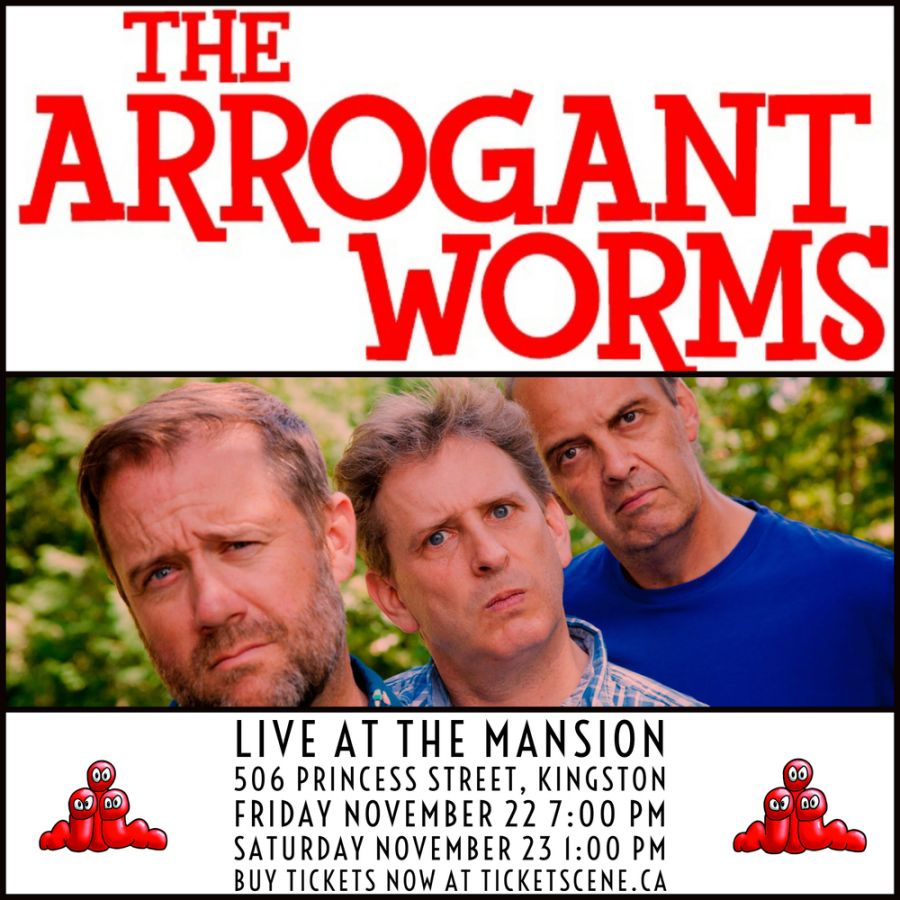 The year was 1991.  Presumably, some significant world events occurred.  The world truly changed in the fall however, when something truly magnificent happened in Kingston, Ontario, Canada. A beacon of hope was lit and has shone brightly ever since – The Arrogant Worms. The Arrogant Worms began as a comedy troupe performing songs and sketches on campus radio. The early feedback on the live shows was clear:  lose the sketches.  So the songs endured and they all remain because the band hates to throw anything out.

The songs were written to make fun of a big dumb world. Luckily, the world is still dumb and The Arrogant Worms (Mike McCormick, Chris Patterson and Trevor Strong) still have plenty to sing about. The shows are fast, furious and family friendly. The wit is quick, the satire is biting and the musicianship is second to none. Their appeal has earned them fans from kids to parents to grandparents to Princess Leia.

The Arrogant Worms have sold more than 160,000 copies of their 13 albums.  Their most recent offering is SPACE, a collection of 16 new songs released in 2014 that bravely tackles the hard issues like Local Politicians, Yoga Pants and Uncomfortable Chairs.  The band has played on three continents to crowds as large as 100,000 and were recognized in 2003 as the Touring Act of the Year by the Canadian Arts Presenters Association. The Worms have entertained at corporate functions, sung anthems at sporting events and emceed at major festivals. Their songs are in school lesson plans, in textbooks and even played on the Space Shuttle. On earth or in space, everyone digs these Worms.

The Arrogant Worms are as comfortable on the radio or on camera as they are on stage. Their energy and showmanship were captured on the DVD of their concert with the renowned Edmonton Symphony Orchestra. The DVD also features appearances by Worm pals figure skating champion Kurt Browning, astronaut Chris Hadfield and actors Tom Cavanaugh (Ed, Love Monkey) and Nathan Fillion (Castle, Firefly).

In recent years the Worms have been pleased to donate their time and talent to the cause of literacy in Canada through Frontier College and were twice awarded the Peter Gzowski Award for their efforts.