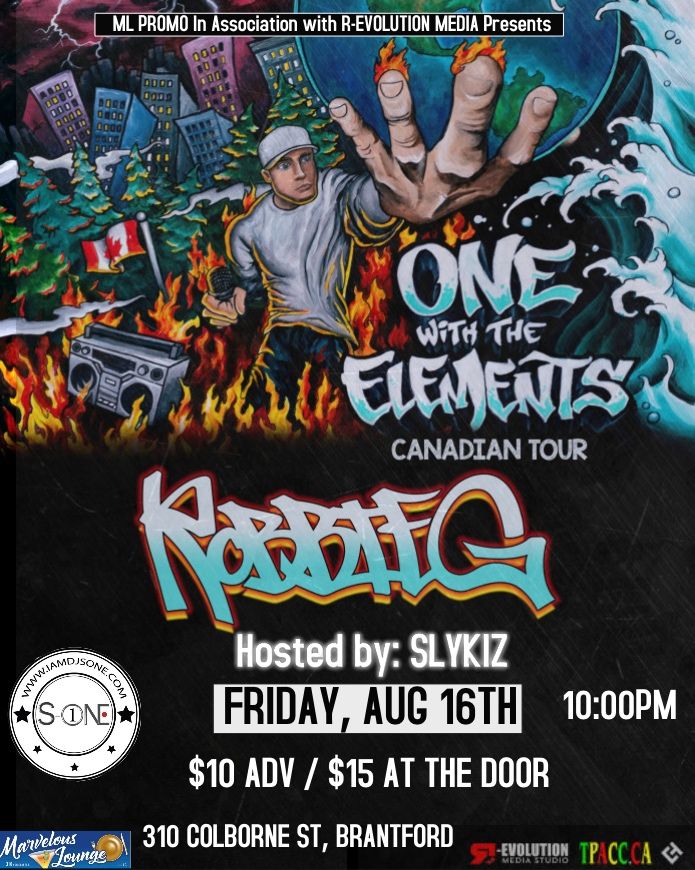 One With The Elements - Canadian Tour

bio:
Robbie G is making a huge impact in the hip-hop scene through Canadian headlining tours and releasing new music consistently since he started out. He released five mixtapes and 6 albums so far. Aside from his musical output, Robbie G has been busy performing at over 500 shows alongside artists such as Wu-Tang Clan, Mos Def, Rakim, Tech N9ne and more. He is now set for another Canadian headlining tour with his new album “One With The Elements” in the spring of 2019.
When not creating and touring, Robbie G is busy running his promotions company, R-Evolution Media based out of Guelph, ON, booking shows in his hometown and across Canada for acts such as: Sean Paul, Akon, T.I., Sean Kingston, Nelly and more. A true entrepreneur and a businessman Robbie G has been able to make a living doing what he loves by putting his passion for hip-hop and his positive outlook on life into his music. Robbie G is personable with fans and is able to put on a high energy performance that has captivated hip-hop fans and music listeners all over the world! Thousands of copies of his albums have sold internationally and include features from Swollen Members, Merkules, Killah Priest, Canibus as well as productions from Classified, C-Lance and more.