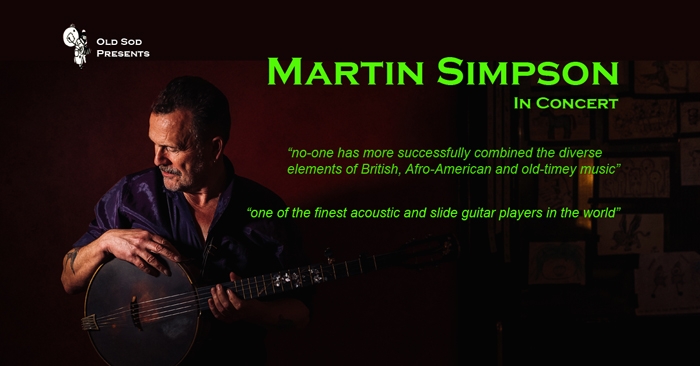 There is no doubt that after 35 years as a professional musician Martin Simpson is, right now, better than ever. Widely acknowledged as one of the finest acoustic and slide guitar players in the world, his interpretations of traditional songs are masterpieces of storytelling. His solo shows are intense, eclectic, spellbinding and deeply moving.

There is no-one who has more successfully combined the diverse elements of British, Afro-American and old-timey music than Simpson. His 15 years living in the US were well spent. In addition his own songwriting has produced some real gems, from the truck-stop epic, "Love Never Dies" to the profoundly moving "Never Any Good" and "One Day".

Martin has been nominated an astounding 26 times in the twelve years of the BBC Radio 2 Folk Awards - more than any other performer - with 9 consecutive years as nominee for Musician of The Year, which he has won twice. 2008 saw an incredible 5 nominations for "Prodigal Son' and 2 wins, whilst in 2010 he had an unprecedented 6 nominations for his CD, "True Stories" and a win for Best Traditional Track, "Sir Patrick Spens". 2012's nominations for Martin include, Best Album for 'Purpose & Grace", Best Traditional Track for "The Lakes Of Ponchartrain" and Best Musician.

Whether playing American old-time music, blues, a Dylan song or his own material, Martin Simpson is unpredictable, individual and a guitarist of immense subtlety.