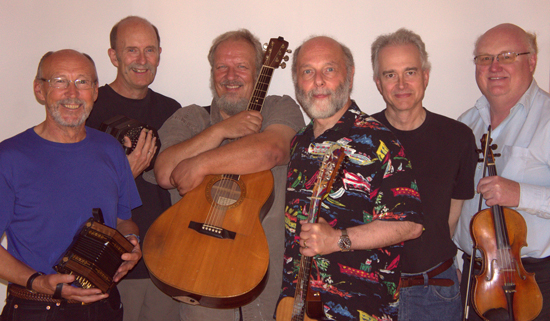 It has become a tradition for the Friends of Fiddler's Green to open each season at the Cuckoo's Nest.  This concert marks the beginning of our 26th year presenting concerts at Chaucer's Pub next to the Marienbad Restaurant in downtown London. We thank Jerry Pribil and his wonderful staff for looking after us so well over all these years.

The Toronto-based "Friends" boast six versatile musicians, five fine singers, three songwriters, brilliant joke tellers, the occasional fiery dragon, one Order of Canada, one Queen's Diamond Jubilee Medal and one of the longest track records in Canadian Folk Music. The Friends were recipients of the 2003 Estelle Klein Award, given by the Ontario Council of Folk Festivals for service to folk music in Ontario.

This totally uncategorizable collection of Friends has been together, with a few personnel changes, since their inauguration at Toronto's Fiddler's Green coffeehouse in 1971. Nobody, not even the Friends themselves, can predict what might happen during one of their concerts, but it always includes humour, powerful vocal harmony, great musicianship, social commentary and an irresistible urge to tap your feet or sing along.