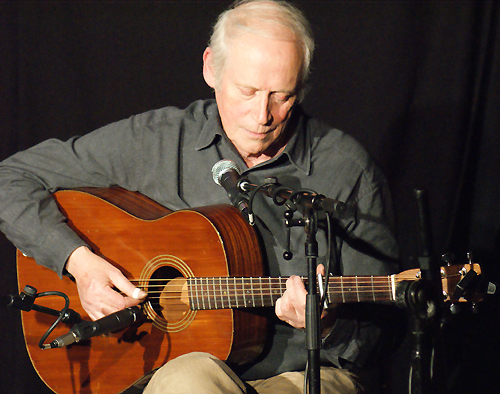 Archie Fisher is one of Scotland’s foremost folksingers, guitarists and songwriters. His achievements as a singer, songwriter, guitarist and producer are second to none. Archie stands as a linchpin figure between folk music’s rural past and its largely urban present; between the Celtic and American folk-song traditions, both old and new. In 2006 Archie was awarded an MBE (Member of the British Empire), a prestigious honor nominated by his peers and bestowed by Queen Elizabeth. for services to traditional music. Recognized for his contributions to Scottish folk music, in 2007 he was inducted into the Scots Traditional Music Hall of Fame. In 2008 Archie was honoured with the Tradition Bearers Award by the Goderich Celtic Roots Festival.

Archie was born in Glasgow into a large singing family, which yielded three professional singers, Archie and his sisters Ray and Cilla Fisher. Constant music, combined with his father’s appreciation of many musical styles (opera, music hall, traditional ballads) had a strong impact on Archie’s musical development, while his mother, a native Gaelic speaker from the Outer Hebrides, was a strong influence on the lyrical quality of his singing and songwriting. His most recent album release is "A Silent Song" on Red House Records.