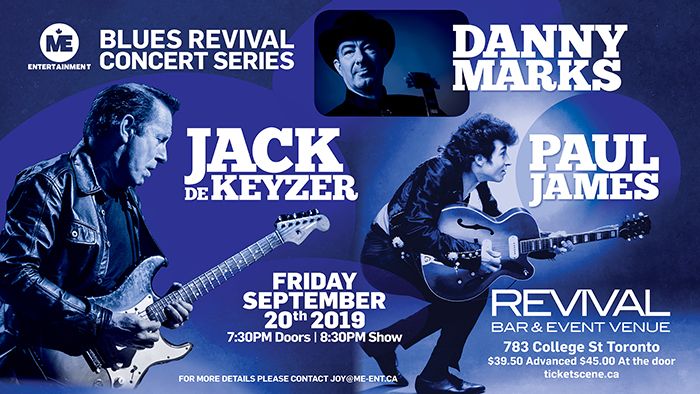 Expect exciting live performances from three of the finest blues guitarists in Canada and beyond.

Jack de Keyzer is a performer, soulful vocalist and world-class songwriter and performs an average of 120 shows per year. De Keyzer has brought audiences to their feet at many major Jazz and Blues Festivals including the Montreal Jazz Fest, Blues Sur Seine (France) The Ottawa Blues Festival and Puerto Blues, (Mexico). A much-celebrated musician, de Keyzer has been nominated for the Juno (Blues Album of the Year) 5 times and won the Juno twice in 2003 and 2010. He has won 7 Maple Blues Awards (Canada’s national blues awards), first place in the International Songwriting Competition and won CBC’s Great Canadian Blues Award from a poll of radio listeners. Always touring with an incredible band, Jack will have you rocking in your seat and swaying to his hot blues, soulful r&b and cool soul jazz. World-class.

"The finest blues guitarist in Canada" Jeff Healey
"If Jack de Keyzer was from Chicago, New York or LA, he'd be famous" Bob Dylan
“Electric Love…a rock blues album with nods to guitar influences Clapton, Hendrix and Page… a disc of excellent new songs by a bluesman who should be considered their equal.” (Maple Blues)

He is the winner of a Juno Award, multiple Toronto Music Awards, The Maple Blues (Lifetime Achievement Award for Blues Music in Canada), the London Fire Hall Lifetime Achievement Award, and he has many more music awards to grace his mantle. However, winning the respect of his musical peers always rated more highly than winning any awards for Paul.

Bo Diddley asked Paul to open his show and to back him up over 100 times between the years 1973 and 2007. Paul co-wrote a song with Bo, recorded with him and helped him to create the whole soundtrack for the movie, ‘Diary of a Sinner’. Bo Diddley played on Paul’s first vinyl album,’ Almost Crazy’, and wrote the liner notes for his second album, ‘The Paul James Band’. In 1986 Bo wrote: “From the beginning of his young career, I predicted that Paul James would be a big star one day and that time is now! The man is a true professional and dynamic! Listening to Paul James is listening to the building of a new thing, and he is a new thing. Paul James is a great musician, He’s a great tribute to Rock’n’Roll.”

Bob Dylan sat in with Paul’s band and came to see Paul perform on numerous occasions. In 1990, Dylan invited Paul James to play an acoustic set to open his show at Canada’s Wonderland. Dylan further invited Paul to sit in with his band many times in Toronto, London, Oshawa and Buffalo. In 1986, when they first met, Dylan advised Paul that if he would move to L.A. and just do what he does in Toronto there, he would make it big for sure.

Sometimes it does pay to play the clown. Just ask Toronto bluesman, Paul James. Way back when, in 1986, James was hamming it up in his trademark style at a Nag's Head North gig. Wearing a crazy, ruffled, purple tuxedo shirt, James boogied over to the bar. He was playing with one hand and drinking a beer with the other when, lo and behold, Bob Dylan jumped up right in front of him. Yes, that Bob Dylan. The legendary folk-rock star was impressed. James, a Dylan fan since he "first heard him," thought he was hallucinating. Dylan joined him on stage. "Just introduce me as the hitchhiker from Vancouver," he told James.

A few weeks ago, Dylan returned the favour -- summoning James to a concert at Buffalo's Midland Arena. Near the end of the show, Dylan announced that he had a friend in the audience. Would Paul James care to join him on stage?

"Uh, oh," James recalls saying to himself. "That's me." Together they performed Highway 61 and Like a Rolling Stone, then came back for an encore of Leopard Skin Pillbox Hat and Buddy Holly's Not Fade Away. After the show, Dylan told James he'd like to give him a call when he's recording his next album.

"Well, do it," said James, who's still walking around in a daze after his "dream come true." Kind of makes it hard, one would imagine, to go back to the dingy barroom circuit.

In 2006, Danny was given the "Blues with a Feeling Award" for lifetime achievement in music and
broadcast.
This iconic rocker's roots go back to the sixties as a founding member of Capitol Records' group,
Edward Bear. After a span as a journeyman session musician throughout the seventies, Danny
settled into the club scene, establishing a cult following as a genre-bender in music and humour.
A house band gig at Toronto's famed Albert's Hall led him to host his own nation-wide TV show,
Stormy Monday. Through the eighties, Danny starred in CBC radio's hit series the Hum Line.
Most recently, Danny Marks recorded two original music albums, Guitarchaeology and True,
before paying tribute to Toronto's R&B roots with Big Town Boy in 2005.
Danny's in his thirteenth year as the radio host of JAZZ.FM91's Saturday night blues show,
bluz.fm. As a child, young Danny would lock himself in his room with a stack of 45's, an old
Seabreeze record player, and a fantasy of having his own radio show. More than a few years
later this pre-pubescent propensity paid off.
"As far back as I can remember, I've wanted to play guitar. Since we didn't have one, I just
plunked on my Granddad’s old violin - until my parents bought me a ukulele."